The Men’s Wearhouse, Inc. (MW): I Still “Like The Way” This Retailer Looks

Shares of formal wear retailer The Men’s Wearhouse, Inc. (NYSE:MW) came under pressure recently, after the company unexpectedly ousted its founder and Executive Chairman, George Zimmer. Zimmer was the founder and the face of the company over the past four decades, best known for his tagline, “You’re going to like the way you look. I guarantee it.”

The company offered no formal explanation regarding the termination, and abruptly postponed its annual shareholder meeting scheduled for June 19, to “re-nominate the existing slate of directors without Mr. Zimmer.” This strange turn of events now has investors questioning the future of The Men’s Wearhouse, Inc. (NYSE:MW), which has been undergoing a steady turnaround under CEO Douglas S. Ewert.

However, I believe that we should calm down and examine all the facts first.

The leader or the face?

Although George Zimmer was the Executive Chairman of the board, it is unclear how much weight his decisions have with the company he founded in 1973. Zimmer served as the CEO of the company until 2011, until Ewert, his personal choice for chief executive, succeeded him. At the time of his termination, Zimmer owned a 3.5% stake in the company, worth $67.45 million. 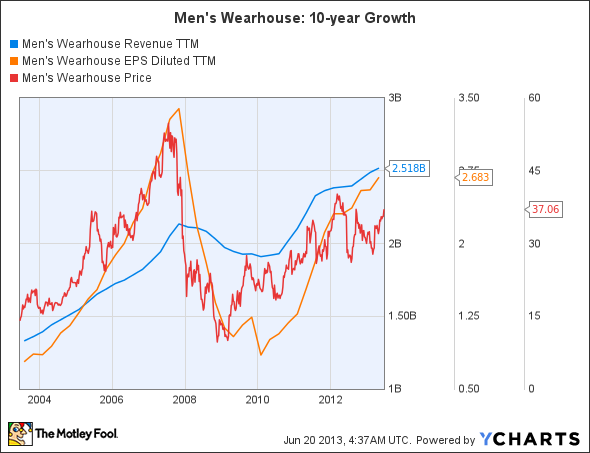 Zimmer and Ewert steadily grew revenue and stabilized the company’s bottom line through tough economic times. Under Zimmer, The Men’s Wearhouse, Inc. (NYSE:MW) expanded into large markets by taking advantage of lower real estate costs. It expanded into casual sportswear in the 1980s and started a tuxedo rental business in 2000.

In its most recent quarter, The Men’s Wearhouse, Inc. (NYSE:MW) reported a 23% year-on-year rise in earnings as revenue climbed 5.1% to $615.5 million. The company’s top and bottom line growth, which it attributed to an earlier Easter and prom season, comfortably topped Wall Street estimates.

Same-store sales rose 4.4% across the company. Its namesake formal wear stores posted a 7.1% gain, which was dragged down by a 2.8% decline at menswear retailer Moores and a 5.3% drop at K&G, which caters to men, women and children.

By all counts, The Men’s Wearhouse, Inc. (NYSE:MW) was pounding Jos. A. Bank Clothiers Inc (NASDAQ:JOSB) into the ground. So what happened?

Is it time to slim down or buff up?

In March, Ewert announced that the company was exploring “strategic alternatives” for K&G, including a sale or spin off of the troubled business. According to an unidentified source at Bloomberg, this was a major source of tension between Ewert and Zimmer, who didn’t support selling the ailing business. Zimmer also reportedly questioned Ewert’s strategy of stock buybacks.

Based on these facts, I believe that Ewert wanted to slim down Men’s Wearhouse by focusing on its core competencies, and use the cash to appease shareholders, while Zimmer wanted to use that cash to turnaround and improve K&G instead.