Is the Market Sitting on a “Margin Bubble?”

The stock market has tumbled in recent sessions, giving many a sense that its peaks have come and gone for this year. Yet it’s worth noting that the major averages are still within 5% to 6% of their yearly highs, so there is ample downside to be had before we can declare an official market correction (which is a drop of 10% or more).

I cautioned about a market pullback on Oct. 5 and the concerns I raised haven’t even fully played out. That said, values are beginning to emerge and signs are pointing to a brighter picture in 2013 — once we get past the landmines that lay before us in 2012.

Yet even if the market trends lower and we start to see solid value plays emerge, it’s important to tread cautiously. Some investors may inadvertently stumble across some trip wires and bring this market far lower.

A replay of 2000?
Investors were in such a lather to buy stocks in the Y2K era that they put every spare dime into stocks — even money they didn’t have. They turned to their brokers, who were happy to lend them money in margin accounts. By the spring of 2000, those same brokers had to call their clients and ask for their money back, as a falling market shrank the equity balances to levels that made the margin loans look too big. As investors sold off their fast-falling dot-com stocks, the market moved lower, triggering even more margin calls and creating one of the ugliest years in investing history. From its peak on March 9, 2000, the Nasdaq would go on to lose half of its value by the end of the year. 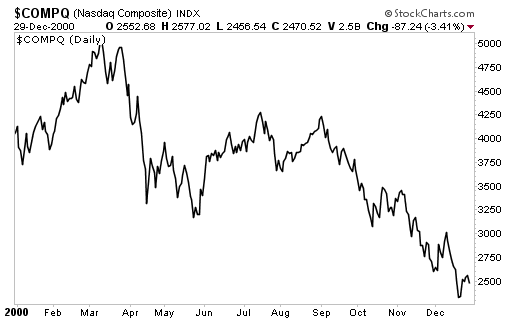 In subsequent years, investors took heed of this painful lesson and managed to keep margin balances in check. But history may again be on the cusp of repeating itself. Margin balances, which are tracked by the Federal Reserve, have risen at an alarming pace this year. In fact, this figure has risen every month of the year, now standing at $165.1 billion. (Note that this is a net figure, after subtracting cash balances in those same accounts). 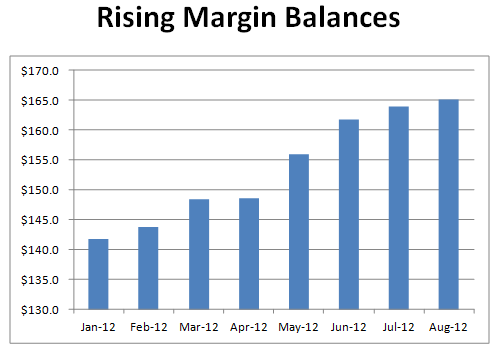 Visiting the history books
In a 2001 landmark study, senior economist of the Federal Reserve Bank of Boston, Peter Fortune, wrote that many of the market’s most painful periods were connected to excessive margin debt. He also notes that it played a key role in the market crash of 1929 and again in the steep market correction of 1987.

How much is too much?
Just because margin debt balances have steadily risen throughout 2012, it doesn’t necessarily mean they’ve hit scary levels. Is $165 billion in margin debt a lot of money compared with past periods of excess? Well, consider that this figure never exceeded $120 billion until May 2006. Also note that it shot past $250 billion near the end of 2007, which was surely a factor when investors were subsequently pushed into selling throughout 2008 and 2009.

Even if just 20% or 30% of margin accounts get a margin call from brokers, then we’re talking about tens of billions in selling pressure into an already weak market. This can push the market down to trigger the next wave of margin calls.

On a purely fundamental basis, there is no reason for the stock market to return to the scary levels of 2008 and early 2009. Corporate cash balances are much stronger than just five years ago. Many stocks appear reasonably priced at current levels and would find buying support at lower levels. But the macro challenges, which have had little effect on the market in recent months, could come to the fore again. And if the market is spooked by Europe, the fiscal cliff, and the prospect of a drop in S&P 500 profits in 2013 or any other such factor, then orderly selling pressure could be compounded by the waves of sell orders investors scrambling to meet margin calls will issue.

Risks to Consider: There are no upside risks here. Margin is a great tool in very inexpensive markets that have been washed out. They are a dangerous tool when the markets are rising higher, as has been the case recently.

Action to Take –> This is an issue you only need to be cognizant of while the market remains near its yearly highs. If we start to see further drops in coming weeks, then the margin call frenzy may come into play, in which case you absolutely need to move to the sidelines and let it play out. Investors were badly burned in 2000 and again in 2008 by failing to understand the effect that margin-induced selling can have.

Should You Buy This 8.5% Yielding Stock?

SIL vs. SLV: How They’ve Performed So Far In 2012
Monthly Newsletter Strategy
Download a free copy of our newsletter and see the details inside!
Hedge Fund Resource Center
Billionaire Hedge Funds