Is The Liberty Braves Group (NASDAQ:BATRA) A Good Stock To Buy?

Does The Liberty Braves Group (NASDAQ:BATRA) represent a good buying opportunity at the moment? Let’s briefly check the hedge fund interest towards the company. Hedge fund firms constantly search out bright intellectuals and highly-experienced employees and throw away millions of dollars on research activities, so it is no wonder why they tend to generate millions in profits each year. It is also true that some hedge fund players fail unconceivably on some occasions, but their stock picks have been generating superior risk-adjusted returns on average over the years.

The Liberty Braves Group (NASDAQ:BATRA) investors should be aware of a decrease in enthusiasm from smart money in recent months. BATRA was in 8 hedge funds’ portfolios at the end of September, down by one from the previous quarter. Having only 8 smart money investors with long positions, the stock was not even close to being considered as one of the 30 most popular stocks among hedge funds.

According to most shareholders, hedge funds are seen as underperforming, old financial vehicles of yesteryear. While there are over 8000 funds in operation at the moment, We choose to focus on the leaders of this group, about 700 funds. These investment experts preside over the lion’s share of all hedge funds’ total asset base, and by watching their best picks, Insider Monkey has uncovered numerous investment strategies that have historically outrun the broader indices. Insider Monkey’s flagship hedge fund strategy outstripped the S&P 500 index by 6 percentage points annually since its inception in May 2014 through early November 2018. We were able to generate large returns even by identifying short candidates. Our portfolio of short stocks lost 26.1% since February 2017 even though the market was up nearly 19% during the same period. We just shared a list of 11 short targets in our latest quarterly update.

“Liberty Braves Group (NASDAQ:BATRA) (0.8%) (BATRA – $27.28 / BATRK – $27.25 – NASDAQ), located in Cobb County, Georgia, was founded in 1871 and is the oldest continuously operating professional sports franchise in the U.S. The Atlanta Braves’ second season at the 41,500 seat SunTrust Park resulted in a 2% increase in average attendance to 31,553 as the young team returned to the playoffs after an absence of five years. The Braves have benefited from the increase in sports team valuations with Forbes’ Braves valuation increasing 41% over the last three years to $1.65 billion, in-line with MLB’s 39% increase. Continued team performance combined with a low payroll effectively locked in for three/four years with a young “controllable” core and a top farm system could drive valuation further. The Braves continue to benefit from MLB broadcast contracts with new broadcasters such as Facebook and potential legal sports (PAPSA) betting revenue. The high stadium attendance supports the 66 acre mixed use real estate development, which is continuing to expand with the new Thyssenkrupp Elevator Americas and Aloft Hotel. The residential property was recently sold for $155 million which bodes well for the $600 million mixed use development which is “hidden” within the group.” 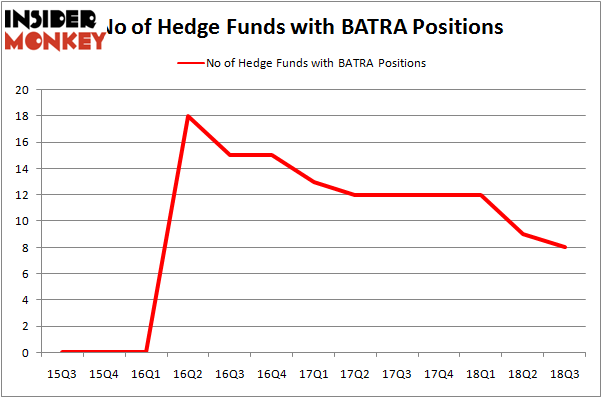 We view hedge fund activity in the stock unfavorable, but in this case there was only a single hedge fund selling its entire position: Fine Capital Partners. One hedge fund selling its entire position doesn’t always imply a bearish intent. Theoretically a hedge fund may decide to sell a promising position in order to invest the proceeds in a more promising idea. However, we don’t think this is the case in this case because none of the 700+ hedge funds tracked by Insider Monkey identified BATRA as a viable investment and initiated a position in the stock.

As you can see these stocks had an average of 16 hedge funds with bullish positions and the average amount invested in these stocks was $123 million. That figure was $69 million in BATRA’s case. ProPetro Holding Corp. (NYSE:PUMP) is the most popular stock in this table. On the other hand OSI Systems, Inc. (NASDAQ:OSIS) is the least popular one with only 9 bullish hedge fund positions. Compared to these stocks The Liberty Braves Group (NASDAQ:BATRA) is even less popular than OSIS. Considering that hedge funds aren’t fond of this stock in relation to other companies analyzed in this article, it may be a good idea to analyze it in detail and understand why the smart money isn’t behind this stock. This isn’t necessarily bad news. Although it is possible that hedge funds may think the stock is overpriced and view the stock as a short candidate, they may not be very familiar with the bullish thesis. In either case more research is warranted.