Is The J.M. Smucker Company (SJM) A Good Stock To Buy?

It was a rough fourth quarter for many hedge funds, which were naturally unable to overcome the big dip in the broad market, as the S&P 500 fell by about 4.8% during 2018 and average hedge fund losing about 1%. The Russell 2000, composed of smaller companies, performed even worse, trailing the S&P by more than 6 percentage points, as investors fled less-known quantities for safe havens. Luckily hedge funds were shifting their holdings into large-cap stocks. The 20 most popular hedge fund stocks actually generated an average return of 18.7% so far in 2019 and outperformed the S&P 500 ETF by 6.6 percentage points. We are done processing the latest 13f filings and in this article we will study how hedge fund sentiment towards The J.M. Smucker Company (NYSE:SJM) changed during the first quarter.

The J.M. Smucker Company (NYSE:SJM) was in 26 hedge funds’ portfolios at the end of March. SJM has experienced an increase in hedge fund interest of late. There were 20 hedge funds in our database with SJM holdings at the end of the previous quarter. Our calculations also showed that SJM isn’t among the 30 most popular stocks among hedge funds.

How are hedge funds trading The J.M. Smucker Company (NYSE:SJM)?

At the end of the first quarter, a total of 26 of the hedge funds tracked by Insider Monkey were bullish on this stock, a change of 30% from the fourth quarter of 2018. On the other hand, there were a total of 16 hedge funds with a bullish position in SJM a year ago. With the smart money’s sentiment swirling, there exists a select group of noteworthy hedge fund managers who were upping their holdings considerably (or already accumulated large positions). 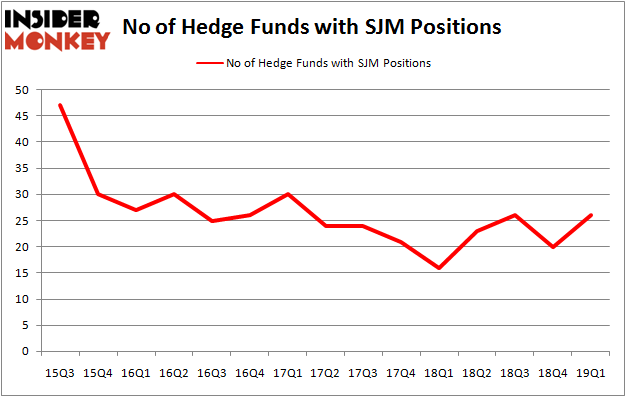 According to publicly available hedge fund and institutional investor holdings data compiled by Insider Monkey, John W. Rogers’s Ariel Investments has the most valuable position in The J.M. Smucker Company (NYSE:SJM), worth close to $189.6 million, comprising 2.4% of its total 13F portfolio. The second largest stake is held by Citadel Investment Group, managed by Ken Griffin, which holds a $119.2 million position; the fund has 0.1% of its 13F portfolio invested in the stock. Some other hedge funds and institutional investors that hold long positions include Israel Englander’s Millennium Management, Bernard Horn’s Polaris Capital Management and Mario Gabelli’s GAMCO Investors.

As you can see these stocks had an average of 28.75 hedge funds with bullish positions and the average amount invested in these stocks was $1607 million. That figure was $574 million in SJM’s case. Godaddy Inc (NYSE:GDDY) is the most popular stock in this table. On the other hand Telecom Italia S.p.A. (NYSE:TI) is the least popular one with only 1 bullish hedge fund positions. The J.M. Smucker Company (NYSE:SJM) is not the least popular stock in this group but hedge fund interest is still below average. Our calculations showed that top 20 most popular stocks among hedge funds returned 1.9% in Q2 through May 30th and outperformed the S&P 500 ETF (SPY) by more than 3 percentage points. A small number of hedge funds were also right about betting on SJM as the stock returned 4.7% during the same time frame and outperformed the market by an even larger margin.