Rumors and speculation regarding the Apple Inc. (NASDAQ:AAPL) “iWatch” have been less than kind to the concept. According to most articles the iWatch is much ado about nothing.

For example, contributor Hayden Shaughnessay in Forbes, pegs the iWatch concept as a “distraction” that will “drive Apple Inc. (NASDAQ:AAPL)’s shares down.

“The rise of the iWatch has been sudden and dramatic enough to be convincing, almost. On serious reflection, though, this is a big distraction for Apple Inc. (NASDAQ:AAPL) – if, indeed, the watch is going to happen.”

“If it does, it will be seen as a low-value, insignificant project for the world’s greatest tech company, one in fact that a start-up (like Pebble) could have thrown onto a crowdfunding site.”

The author provides a number of arguments that he feels points to the weaknesses in the iWatch concept:

The size of the current watch market is small and fragmented.

Critics will not like the product because it doesn’t “solve complex problems and create complex environments for its products and services.”

Tim Cook is on the board at NIKE, Inc. (NYSE:NKE), and can’t introduce a project that will compete with the company’s Fuelband fitness bracelet.

Let’s step through these arguments and provide another possible scenario.

While an iWatch wearable would go on your wrist, using the current watch market as a measure of opportunity is, in my opinion, extremely shortsighted. Telling time, would at best be a tertiary function of the device.

I see the primary purpose of an iWatch to be allowing a user to “keep their iPhone in their pocket” while increasing the availability of valued information. So as an iPhone/smartphone accessory, it seems market size benchmarks are better compared with the current and forecasted smartphone market.

According to estimates current global sales for smartphones stands around 800 million units and are expect to grow to 1.6 billion units by 2016. Assuming 20% penetration for wearables and a (conservative) average price of $199 – the wearable market opportunity ranges from $31.8 – $63.6 billion dollars. 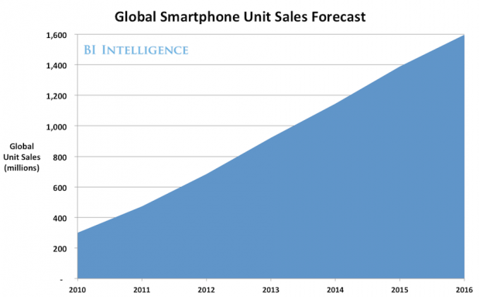 Wearables function: To keep phone and wallet in pocket or purse

Shaughnessy claims, with no big idea behind the iWatch, there will be no investor excitement to drive share price. I argue the opposite – I see an iWatch (or any wearable) as the key product that completes the “mobile computing promise” of smartphones.

By design, a smartphone is often not in a user’s hands. A wearable, tethered to a smartphone, allows for “instant access” to smartphone functions, eliminating the ongoing “phone fumble” that often happens in the car, at a meeting, in the gym, or while simply taking a walk. User value for the device will be driven by increased ubiquity of information.

Here are a few examples of possible high value “instant access” information for users (again, the wearable allows access to the data immediater, with no fishing in pocket or purse.):

But, I don’t think that “instant access” is necessarily the big “Big Idea:”