The Hartford Financial Services Group, Inc. (NYSE:HIG) shareholders have witnessed an increase in activity from the world’s largest hedge funds lately. HIG was in 37 hedge funds’ portfolios at the end of March. There were 30 hedge funds in our database with HIG positions at the end of the previous quarter. Our calculations also showed that hig isn’t among the 30 most popular stocks among hedge funds.

If you’d ask most investors, hedge funds are assumed to be worthless, outdated investment tools of the past. While there are more than 8000 funds trading today, Our researchers look at the bigwigs of this group, approximately 750 funds. These hedge fund managers orchestrate most of the smart money’s total capital, and by following their inimitable investments, Insider Monkey has uncovered a number of investment strategies that have historically outpaced Mr. Market. Insider Monkey’s flagship hedge fund strategy outpaced the S&P 500 index by around 5 percentage points per year since its inception in May 2014 through the end of May. We were able to generate large returns even by identifying short candidates. Our portfolio of short stocks lost 30.9% since February 2017 (through May 30th) even though the market was up nearly 24% during the same period. We just shared a list of 5 short targets in our latest quarterly update and they are already down an average of 11.9% in less than a couple of weeks whereas our long picks outperformed the market by 2 percentage points in this volatile 2 week period.

At the end of the first quarter, a total of 37 of the hedge funds tracked by Insider Monkey held long positions in this stock, a change of 23% from the previous quarter. Below, you can check out the change in hedge fund sentiment towards HIG over the last 15 quarters. So, let’s examine which hedge funds were among the top holders of the stock and which hedge funds were making big moves. 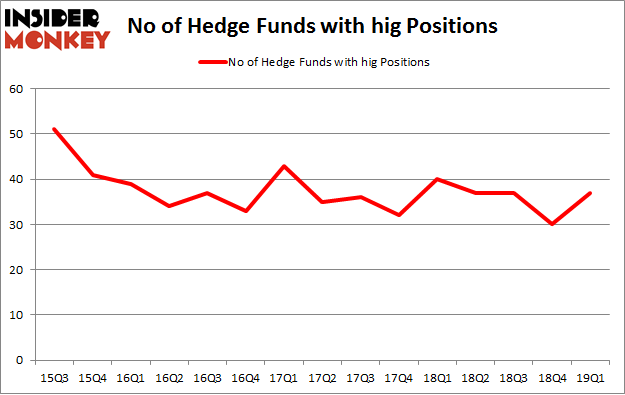 More specifically, Citadel Investment Group was the largest shareholder of The Hartford Financial Services Group, Inc. (NYSE:HIG), with a stake worth $262 million reported as of the end of March. Trailing Citadel Investment Group was Diamond Hill Capital, which amassed a stake valued at $224.9 million. D E Shaw, Two Sigma Advisors, and Balyasny Asset Management were also very fond of the stock, giving the stock large weights in their portfolios.

As industrywide interest jumped, key hedge funds were breaking ground themselves. Stevens Capital Management, managed by Matthew Tewksbury, created the biggest position in The Hartford Financial Services Group, Inc. (NYSE:HIG). Stevens Capital Management had $7.9 million invested in the company at the end of the quarter. Anand Parekh’s Alyeska Investment Group also made a $6.7 million investment in the stock during the quarter. The other funds with new positions in the stock are John Brandmeyer’s Cognios Capital, Paul Tudor Jones’s Tudor Investment Corp, and Jeffrey Talpins’s Element Capital Management.

As you can see these stocks had an average of 27.75 hedge funds with bullish positions and the average amount invested in these stocks was $884 million. That figure was $1333 million in HIG’s case. CBS Corporation (NYSE:CBS) is the most popular stock in this table. On the other hand Plains All American Pipeline, L.P. (NYSE:PAA) is the least popular one with only 8 bullish hedge fund positions. The Hartford Financial Services Group, Inc. (NYSE:HIG) is not the most popular stock in this group but hedge fund interest is still above average. Our calculations showed that top 20 most popular stocks among hedge funds returned 1.9% in Q2 through May 30th and outperformed the S&P 500 ETF (SPY) by more than 3 percentage points. Hedge funds were also right about betting on HIG as the stock returned 6.7% during the same period and outperformed the market by an even larger margin. Hedge funds were rewarded for their relative bullishness.