Is The Descartes Systems Group Inc (DSGX) A Good Stock To Buy?

The market has been volatile in the last 6 months as the Federal Reserve continued its rate hikes and then abruptly reversed its stance and uncertainty looms over trade negotiations with China. Small cap stocks have been hit hard as a result, as the Russell 2000 ETF (IWM) has underperformed the larger S&P 500 ETF (SPY) by nearly 9 percentage points. SEC filings and hedge fund investor letters indicate that the smart money seems to be paring back their overall long exposure since summer months, though some funds increased their exposure dramatically at the end of Q4 and the beginning of Q1. In this article, we analyze what the smart money thinks of The Descartes Systems Group Inc (NASDAQ:DSGX) and find out how it is affected by hedge funds’ moves.

The Descartes Systems Group Inc (NASDAQ:DSGX) shareholders have witnessed a decrease in enthusiasm from smart money lately. Our calculations also showed that DSGX isn’t among the 30 most popular stocks among hedge funds.

We’re going to take a look at the latest hedge fund action regarding The Descartes Systems Group Inc (NASDAQ:DSGX).

What have hedge funds been doing with The Descartes Systems Group Inc (NASDAQ:DSGX)?

At the end of the first quarter, a total of 10 of the hedge funds tracked by Insider Monkey were long this stock, a change of -17% from the fourth quarter of 2018. The graph below displays the number of hedge funds with bullish position in DSGX over the last 15 quarters. With hedge funds’ capital changing hands, there exists a few noteworthy hedge fund managers who were boosting their stakes considerably (or already accumulated large positions). 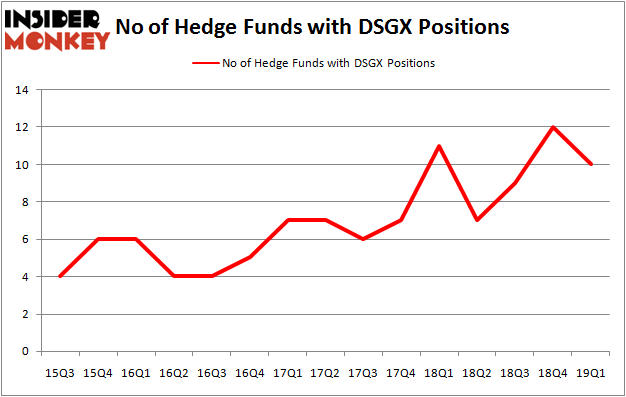 More specifically, Arrowstreet Capital was the largest shareholder of The Descartes Systems Group Inc (NASDAQ:DSGX), with a stake worth $33.1 million reported as of the end of March. Trailing Arrowstreet Capital was Renaissance Technologies, which amassed a stake valued at $18.8 million. Echo Street Capital Management, Royce & Associates, and Millennium Management were also very fond of the stock, giving the stock large weights in their portfolios.

Since The Descartes Systems Group Inc (NASDAQ:DSGX) has experienced falling interest from hedge fund managers, it’s safe to say that there were a few hedge funds that slashed their positions entirely heading into Q3. Interestingly, Mark N. Diker’s Diker Management sold off the largest investment of all the hedgies monitored by Insider Monkey, comprising about $4.6 million in stock. John Overdeck and David Siegel’s fund, Two Sigma Advisors, also dumped its stock, about $1.5 million worth. These bearish behaviors are interesting, as aggregate hedge fund interest was cut by 2 funds heading into Q3.

As you can see these stocks had an average of 14.75 hedge funds with bullish positions and the average amount invested in these stocks was $96 million. That figure was $81 million in DSGX’s case. EnerSys (NYSE:ENS) is the most popular stock in this table. On the other hand BancorpSouth Bank (NYSE:BXS) is the least popular one with only 9 bullish hedge fund positions. The Descartes Systems Group Inc (NASDAQ:DSGX) is not the least popular stock in this group but hedge fund interest is still below average. Our calculations showed that top 20 most popular stocks among hedge funds returned 6.2% in Q2 through June 19th and outperformed the S&P 500 ETF (SPY) by nearly 3 percentage points. A small number of hedge funds were also right about betting on DSGX, though not to the same extent, as the stock returned 4.4% during the same time frame and outperformed the market as well.

Related Insider Monkey Articles
How Amazon.com Inc and Other Hedge Fund Favorites Performed in Q2Here’s What Hedge Funds Think About Del Frisco’s Restaurant Group...Here’s What Hedge Funds Think About Halcon Resources Corp (HK)
How Microsoft Corporation and Other Hedge Fund Favorites Performed in Q2How Alphabet Inc and Other Hedge Fund Favorites Performed in Q2Hedge Funds Have Never Been This Bullish On Ring Energy Inc (REI)
Monthly Newsletter Strategy
Download a free copy of our newsletter and see the details inside!
Hedge Fund Resource Center
Related News
Were Hedge Funds Right About Flocking Into Descartes Systems Group (DSGX) ? Why Descartes Systems Group Inc. (USA) (DSGX), AmeriGas Partners LP (APU), and Three Other Stocks Are in Spotlight Today Servicesource International Inc (SREV): Are Hedge Funds Right About This Stock? Should You Avoid Tangoe Inc (TNGO)? CSG Systems International, Inc. (CSGS): Hedge Fund and Insider Sentiment Unchanged, What Should You Do? This Metric Says You Are Smart to Sell Ebix Inc (EBIX) Tangoe Inc (TNGO): Hedge Funds Are Bullish and Insiders Are Bearish, What Should You Do? 25 Biggest Activist Short Sellers in the Hedge Fund World 21 Best Tinder Bio Examples for Newly Single Moms 17 Best Excuses to Get Out of Work
Billionaire Hedge Funds