Is The Coca-Cola Company (KO) A Good Stock To Buy?

We know that hedge funds generate strong, risk-adjusted returns over the long run, therefore imitating the picks that they are collectively bullish on can be a profitable strategy for retail investors. With billions of dollars in assets, smart money investors have to conduct complex analyses, spend many resources and use tools that are not always available for the general crowd. This doesn’t mean that they don’t have occasional colossal losses; they do (like Melvin Capital’s recent GameStop losses). However, it is still a good idea to keep an eye on hedge fund activity. With this in mind, as the current round of 13F filings has just ended, let’s examine the smart money sentiment towards The Coca-Cola Company (NYSE:KO).

Is KO a good stock to buy? The Coca-Cola Company (NYSE:KO) was in 61 hedge funds’ portfolios at the end of the first quarter of 2021. The all time high for this statistic is 62. KO shareholders have witnessed a decrease in hedge fund sentiment lately. There were 62 hedge funds in our database with KO holdings at the end of December. Our calculations also showed that KO isn’t among the 30 most popular stocks among hedge funds (click for Q1 rankings).

In the financial world there are a large number of tools investors have at their disposal to grade stocks. A pair of the most under-the-radar tools are hedge fund and insider trading indicators. We have shown that, historically, those who follow the top picks of the best fund managers can outperform the broader indices by a solid amount. Insider Monkey’s monthly stock picks returned 206.8% since March 2017 and outperformed the S&P 500 ETFs by more than 115 percentage points (see the details here). That’s why we believe hedge fund sentiment is a useful indicator that investors should pay attention to.

At Insider Monkey we leave no stone unturned when looking for the next great investment idea. For example, lithium mining is one of the fastest growing industries right now, so we are checking out stock pitches like this emerging lithium stock. We go through lists like the 10 best hydrogen fuel cell stocks to pick the next Tesla that will deliver a 10x return. Even though we recommend positions in only a tiny fraction of the companies we analyze, we check out as many stocks as we can. We read hedge fund investor letters and listen to stock pitches at hedge fund conferences. You can subscribe to our free daily newsletter on our homepage. Now we’re going to take a look at the fresh hedge fund action regarding The Coca-Cola Company (NYSE:KO).

Do Hedge Funds Think KO Is A Good Stock To Buy Now?

Heading into the second quarter of 2021, a total of 61 of the hedge funds tracked by Insider Monkey were bullish on this stock, a change of -2% from one quarter earlier. On the other hand, there were a total of 55 hedge funds with a bullish position in KO a year ago. With hedgies’ positions undergoing their usual ebb and flow, there exists an “upper tier” of noteworthy hedge fund managers who were boosting their stakes significantly (or already accumulated large positions). 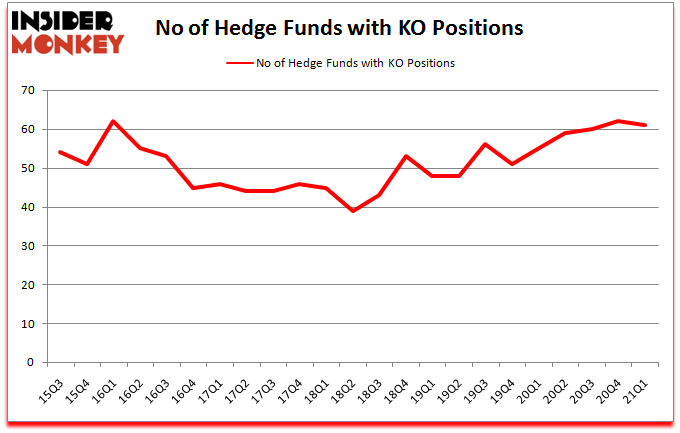 More specifically, Berkshire Hathaway was the largest shareholder of The Coca-Cola Company (NYSE:KO), with a stake worth $21084 million reported as of the end of March. Trailing Berkshire Hathaway was D E Shaw, which amassed a stake valued at $718.3 million. Arrowstreet Capital, Yacktman Asset Management, and Bridgewater Associates were also very fond of the stock, becoming one of the largest hedge fund holders of the company. In terms of the portfolio weights assigned to each position Deep Field Asset Management allocated the biggest weight to The Coca-Cola Company (NYSE:KO), around 11.88% of its 13F portfolio. Alight Capital is also relatively very bullish on the stock, designating 9.11 percent of its 13F equity portfolio to KO.

Seeing as The Coca-Cola Company (NYSE:KO) has witnessed bearish sentiment from the smart money, we can see that there is a sect of hedge funds who were dropping their entire stakes by the end of the first quarter. Interestingly, Jack Woodruff’s Candlestick Capital Management dropped the largest investment of the “upper crust” of funds followed by Insider Monkey, totaling about $74 million in stock. Robert Pohly’s fund, Samlyn Capital, also sold off its stock, about $68.9 million worth. These moves are important to note, as total hedge fund interest was cut by 1 funds by the end of the first quarter.

As you can see these stocks had an average of 57.1 hedge funds with bullish positions and the average amount invested in these stocks was $3419 million. That figure was $24904 million in KO’s case. NIKE, Inc. (NYSE:NKE) is the most popular stock in this table. On the other hand Toyota Motor Corporation (NYSE:TM) is the least popular one with only 18 bullish hedge fund positions. The Coca-Cola Company (NYSE:KO) is not the most popular stock in this group but hedge fund interest is still above average. Our overall hedge fund sentiment score for KO is 69.3. Stocks with higher number of hedge fund positions relative to other stocks as well as relative to their historical range receive a higher sentiment score. This is a slightly positive signal but we’d rather spend our time researching stocks that hedge funds are piling on. Our calculations showed that top 5 most popular stocks among hedge funds returned 95.8% in 2019 and 2020, and outperformed the S&P 500 ETF (SPY) by 40 percentage points. These stocks gained 17.2% in 2021 through June 11th and beat the market again by 3.3 percentage points. Unfortunately KO wasn’t nearly as popular as these 5 stocks and hedge funds that were betting on KO were disappointed as the stock returned 6.5% since the end of March (through 6/11) and underperformed the market. If you are interested in investing in large cap stocks with huge upside potential, you should check out the top 5 most popular stocks among hedge funds as many of these stocks already outperformed the market since 2019.

Is KO A Good Investment Right Now?is KO a good stock to buyNYSE:KOSentiment Score Between 60 and 70Yahoo Finance