Is The Clorox Company (CLX) A Good Stock To Buy?

Legendary investors such as Leon Cooperman and Seth Klarman earn enormous amounts of money for themselves and their investors by doing in-depth research on small-cap stocks that big brokerage houses don’t publish. Small cap stocks -especially when they are screened well- can generate substantial outperformance versus a boring index fund. That’s why we analyze the activity of those elite funds in these small-cap stocks. In the following paragraphs, we analyze The Clorox Company (NYSE:CLX) from the perspective of those elite funds.

Is The Clorox Company (NYSE:CLX) the right investment to pursue these days? Investors who are in the know are buying. The number of long hedge fund bets inched up by 12 recently. Our calculations also showed that CLX isn’t among the 30 most popular stocks among hedge funds.

Heading into the fourth quarter of 2018, a total of 22 of the hedge funds tracked by Insider Monkey were long this stock, a change of 120% from the second quarter of 2018. On the other hand, there were a total of 22 hedge funds with a bullish position in CLX at the beginning of this year. With hedgies’ capital changing hands, there exists an “upper tier” of noteworthy hedge fund managers who were adding to their stakes substantially (or already accumulated large positions). 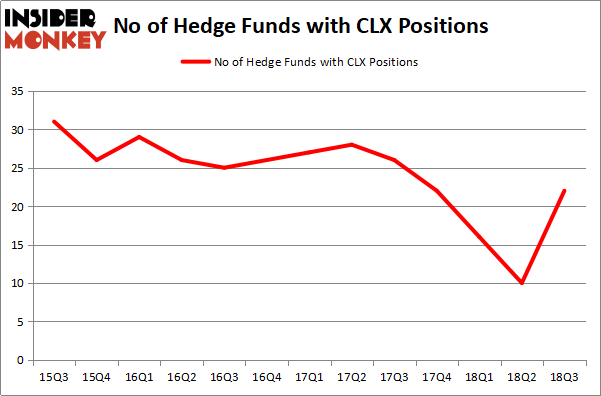 Of the funds tracked by Insider Monkey, Cedar Rock Capital, managed by Andy Brown, holds the largest position in The Clorox Company (NYSE:CLX). Cedar Rock Capital has a $433.7 million position in the stock, comprising 10.7% of its 13F portfolio. The second most bullish fund manager is Renaissance Technologies, led by Jim Simons, holding a $350.7 million position; the fund has 0.4% of its 13F portfolio invested in the stock. Other peers that hold long positions include Cliff Asness’s AQR Capital Management, and Phill Gross and Robert Atchinson’s Adage Capital Management.

With a general bullishness amongst the heavyweights, key hedge funds have been driving this bullishness. Samlyn Capital, managed by Robert Pohly, initiated the largest call position in The Clorox Company (NYSE:CLX). Samlyn Capital had $30.1 million invested in the company at the end of the quarter. Phill Gross and Robert Atchinson’s Adage Capital Management also initiated a $23.9 million position during the quarter. The following funds were also among the new CLX investors: Jeffrey Talpins’s Element Capital Management, Joel Greenblatt’s Gotham Asset Management, and Anna Nikolayevsky’s Axel Capital Management.

As you can see these stocks had an average of 16 hedge funds with bullish positions and the average amount invested in these stocks was $786 million. That figure was $1.00 billion in CLX’s case. American Airlines Group Inc (NASDAQ:AAL) is the most popular stock in this table. On the other hand KB Financial Group, Inc. (NYSE:KB) is the least popular one with only 4 bullish hedge fund positions. The Clorox Company (NYSE:CLX) is not the most popular stock in this group but hedge fund interest is still above average. This is a slightly positive signal but we’d rather spend our time researching stocks that hedge funds are piling on. In this regard AAL might be a better candidate to consider a long position.