Is The Children’s Place Inc. (PLCE) Going to Burn These Hedge Funds?

The fourth quarter was a rough one for most investors, as fears of a rising interest rate environment in the U.S, a trade war with China, and a more or less stagnant Europe, weighed heavily on the minds of investors. Both the S&P 500 and Russell 2000 sank as a result, with the Russell 2000, which is composed of smaller companies, being hit especially hard. This was primarily due to hedge funds, which are big supporters of small-cap stocks, pulling some of their capital out of the volatile markets during this time. Let’s look at how this market volatility affected the sentiment of hedge funds towards The Children’s Place Inc. (NASDAQ:PLCE), and what that likely means for the prospects of the company and its stock.

The Children’s Place Inc. (NASDAQ:PLCE) has seen a decrease in support from the world’s most elite money managers in recent months. Our calculations also showed that PLCE isn’t among the 30 most popular stocks among hedge funds.

What have hedge funds been doing with The Children’s Place Inc. (NASDAQ:PLCE)?

At the end of the third quarter, a total of 23 of the hedge funds tracked by Insider Monkey were long this stock, a change of -8% from one quarter earlier. On the other hand, there were a total of 26 hedge funds with a bullish position in PLCE at the beginning of this year. With hedge funds’ positions undergoing their usual ebb and flow, there exists a few notable hedge fund managers who were adding to their holdings substantially (or already accumulated large positions). 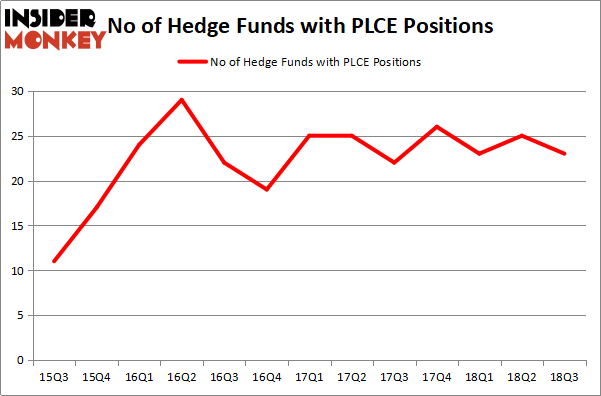 More specifically, Viking Global was the largest shareholder of The Children’s Place Inc. (NASDAQ:PLCE), with a stake worth $69.9 million reported as of the end of September. Trailing Viking Global was Royce & Associates, which amassed a stake valued at $66.3 million. Marshall Wace LLP, Citadel Investment Group, and Buckingham Capital Management were also very fond of the stock, giving the stock large weights in their portfolios.

Since The Children’s Place Inc. (NASDAQ:PLCE) has experienced a decline in interest from hedge fund managers, it’s easy to see that there were a few fund managers that decided to sell off their full holdings by the end of the third quarter. It’s worth mentioning that Jim Simons’s Renaissance Technologies sold off the biggest position of the “upper crust” of funds watched by Insider Monkey, totaling an estimated $19.2 million in stock. Alexander Mitchell’s fund, Scopus Asset Management, also dumped its stock, about $16.9 million worth. These moves are intriguing to say the least, as aggregate hedge fund interest fell by 2 funds by the end of the third quarter.

As you can see these stocks had an average of 17.25 hedge funds with bullish positions and the average amount invested in these stocks was $225 million. That figure was $390 million in PLCE’s case. Comfort Systems USA, Inc. (NYSE:FIX) is the most popular stock in this table. On the other hand CNOOC Limited (NYSE:CEO) is the least popular one with only 15 bullish hedge fund positions. Compared to these stocks The Children’s Place Inc. (NASDAQ:PLCE) is more popular among hedge funds. Considering that hedge funds are fond of this stock in relation to its market cap peers, it may be a good idea to analyze it in detail and potentially include it in your portfolio.