Is The Chemours Company (CC) A Good Stock To Buy?

The Chemours Company (NYSE:CC) shares haven’t seen a lot of action during the third quarter. Overall, hedge fund sentiment was unchanged. The stock was in 31 hedge funds’ portfolios at the end of the third quarter of 2018. The level and the change in hedge fund popularity aren’t the only variables you need to analyze to decipher hedge funds’ perspectives. A stock may witness a boost in popularity but it may still be less popular than similarly priced stocks. That’s why at the end of this article we will examine companies such as Apartment Investment and Management Co. (NYSE:AIV), Teradyne, Inc. (NYSE:TER), and W.P. Carey Inc. REIT (NYSE:WPC) to gather more data points.

“In July 2015, DuPont spun off its titanium dioxide (TiO2) and fluoroproducts businesses into Chemours (CC), which opened at $16 before collapsing (along with TiO2 prices) to $3 a share in January. We began buying in Q4 2015, believing that TiO2 prices were at or near the bottom. As the market caught up to our thinking, the shares began a rapid recovery, and we held an incomplete position.

In June, a short recommendation achieved widespread publicity and caused the shares to temporarily retreat, enabling us to complete purchasing our stake at attractive prices. The report posited that DuPont created CC to offload environmental remediation costs and a sizable litigation backlog over a discontinued product that would cost the company an estimated $5 billion. Calling CC a company that had been “designed to fail,” the report warned that the company would collapse under a pile of debt, environmental liabilities, and especially legal liabilities.

We see an obvious flaw in this analysis: DuPont remains the primary defendant in all the litigation (it has an indemnification from CC) such that bankrupting CC would not relieve it of liability. We enquired directly about the $5 billion estimate, and the author of the report acknowledged there was no math to justify the figure. After considerable work and engaging our own outside experts, who estimate the liability to be only several hundred million dollars, we believe CC’s debt and legal liabilities are manageable.

CC should benefit from the continued recovery of TiO2 prices. Further, EU regulations are driving adoption of CC’s next-generation refrigerant Opteon, which should increase fluoroproducts profits. Lastly, management can reduce costs and shutter unprofitable businesses now that the company is independent of DuPont. We expect the stock to appreciate as investors refocus on the earnings power of the business, which we think will approach $2.00 in 2017. Our overall average purchase price is $6.58 and CC ended the quarter at $8.24.”

If you’d ask most stock holders, hedge funds are viewed as slow, old investment vehicles of the past. While there are over 8,000 funds with their doors open at present, We hone in on the upper echelon of this group, about 700 funds. These money managers control most of the hedge fund industry’s total capital, and by keeping track of their finest investments, Insider Monkey has unearthed a number of investment strategies that have historically outrun the S&P 500 index. Insider Monkey’s flagship hedge fund strategy beat the S&P 500 index by 6 percentage points per annum since its inception in May 2014 through early November 2018. We were able to generate large returns even by identifying short candidates. Our portfolio of short stocks lost 24% since February 2017 (through December 3rd) even though the market was up nearly 23% during the same period. We just shared a list of 11 short targets in our latest quarterly update. 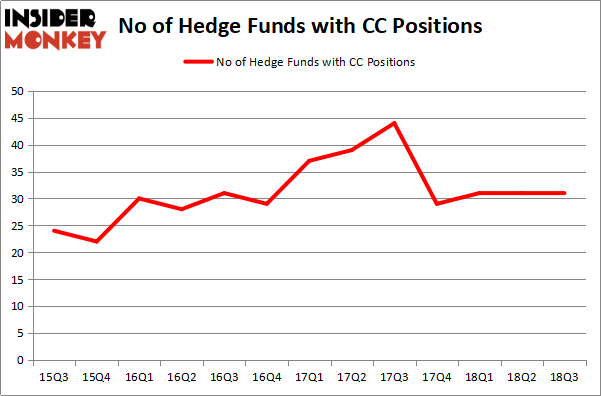 According to publicly available hedge fund and institutional investor holdings data compiled by Insider Monkey, David Cohen and Harold Levy’s Iridian Asset Management has the biggest position in The Chemours Company (NYSE:CC), worth close to $371.5 million, accounting for 3.7% of its total 13F portfolio. Sitting at the No. 2 spot is AQR Capital Management, led by Cliff Asness, holding a $83.9 million position; 0.1% of its 13F portfolio is allocated to the company. Some other hedge funds and institutional investors that are bullish comprise Paul Marshall and Ian Wace’s Marshall Wace LLP, Phill Gross and Robert Atchinson’s Adage Capital Management and D. E. Shaw’s D E Shaw.

Due to the fact that The Chemours Company (NYSE:CC) has experienced declining sentiment from hedge fund managers, we can see that there were a few money managers who were dropping their entire stakes in the third quarter. At the top of the heap, Louis Navellier’s Navellier & Associates dropped the biggest investment of the 700 funds tracked by Insider Monkey, comprising an estimated $3.2 million in stock. George Hall’s fund, Clinton Group, also sold off its stock, about $3.1 million worth. These bearish behaviors are interesting, as total hedge fund interest stayed the same (this is a bearish signal in our experience).

Let’s check out hedge fund activity in other stocks – not necessarily in the same industry as The Chemours Company (NYSE:CC) but similarly valued. We will take a look at Apartment Investment and Management Co. (NYSE:AIV), Teradyne, Inc. (NYSE:TER), W. P. Carey Inc. (NYSE:WPC), and Xerox Corporation (NYSE:XRX). This group of stocks’ market caps are similar to CC’s market cap.

As you can see these stocks had an average of 22.5 hedge funds with bullish positions and the average amount invested in these stocks was $601 million. That figure was $792 million in CC’s case. Xerox Corporation (NYSE:XRX) is the most popular stock in this table. On the other hand W. P. Carey Inc. (NYSE:WPC) is the least popular one with only 10 bullish hedge fund positions. The Chemours Company (NYSE:CC) is not the most popular stock in this group but hedge fund interest is still above average. This is a slightly positive signal but we’d rather spend our time researching stocks that hedge funds are piling on. In this regard XRX might be a better candidate to consider a long position.