Is The Boston Beer Company Inc (SAM) A Good Stock To Buy ?

While the market driven by short-term sentiment influenced by the accomodative interest rate environment in the US, increasing oil prices and optimism towards the resolution of the trade war with China, many smart money investors kept their cautious approach regarding the current bull run in the first quarter and hedging or reducing many of their long positions. However, as we know, big investors usually buy stocks with strong fundamentals, which is why we believe we can profit from imitating them. In this article, we are going to take a look at the smart money sentiment surrounding The Boston Beer Company Inc (NYSE:SAM).

The Boston Beer Company Inc (NYSE:SAM) shareholders have witnessed an increase in hedge fund interest in recent months. Our calculations also showed that sam isn’t among the 30 most popular stocks among hedge funds.

What does the smart money think about The Boston Beer Company Inc (NYSE:SAM)? 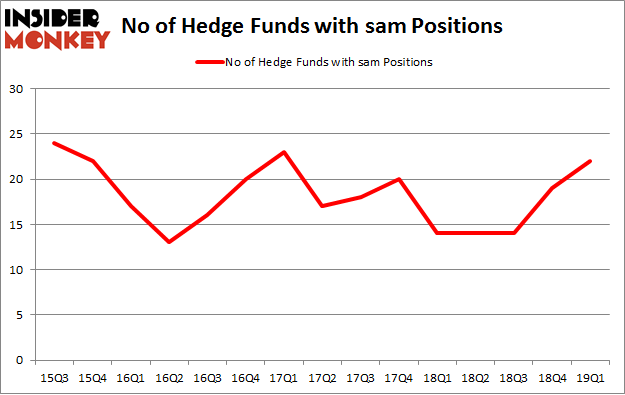 As industrywide interest jumped, some big names were breaking ground themselves. PDT Partners, managed by Peter Muller, initiated the largest position in The Boston Beer Company Inc (NYSE:SAM). PDT Partners had $3.9 million invested in the company at the end of the quarter. Richard Driehaus’s Driehaus Capital also made a $2.9 million investment in the stock during the quarter. The following funds were also among the new SAM investors: Jeffrey Talpins’s Element Capital Management, Joel Greenblatt’s Gotham Asset Management, and David Costen Haley’s HBK Investments.

As you can see these stocks had an average of 18.75 hedge funds with bullish positions and the average amount invested in these stocks was $294 million. That figure was $387 million in SAM’s case. FireEye Inc (NASDAQ:FEYE) is the most popular stock in this table. On the other hand Copa Holdings, S.A. (NYSE:CPA) is the least popular one with only 14 bullish hedge fund positions. The Boston Beer Company Inc (NYSE:SAM) is not the most popular stock in this group but hedge fund interest is still above average. Our calculations showed that top 20 most popular stocks among hedge funds returned 1.9% in Q2 through May 30th and outperformed the S&P 500 ETF (SPY) by more than 3 percentage points. Hedge funds were also right about betting on SAM as the stock returned 7.8% during the same period and outperformed the market by an even larger margin. Hedge funds were rewarded for their relative bullishness.