Is The Boeing Company (BA) A Good Stock To Buy According To Hedge Funds?

Before we spend days researching a stock idea we’d like to take a look at how hedge funds and billionaire investors recently traded that stock. S&P 500 Index ETF (SPY) lost 8.7% through October 26th. Forty percent of the S&P 500 constituents were down more than 10%. The average return of a randomly picked stock in the index is -9.5%. This means you (or a monkey throwing a dart) have less than an even chance of beating the market by randomly picking a stock. On the other hand, the top 25 most popular S&P 500 stocks among hedge funds had an average loss of 8.8%. In this article, we will take a look at what hedge funds think about The Boeing Company (NYSE:BA).

Hedge fund interest in The Boeing Company (NYSE:BA) shares was flat at the end of last quarter. This is usually a negative indicator. At the end of this article we will also compare BA to other stocks including The Procter & Gamble Company (NYSE:PG), China Mobile Limited (NYSE:CHL), and Novartis AG (NYSE:NVS) to get a better sense of its popularity.

How are hedge funds trading The Boeing Company (NYSE:BA)? 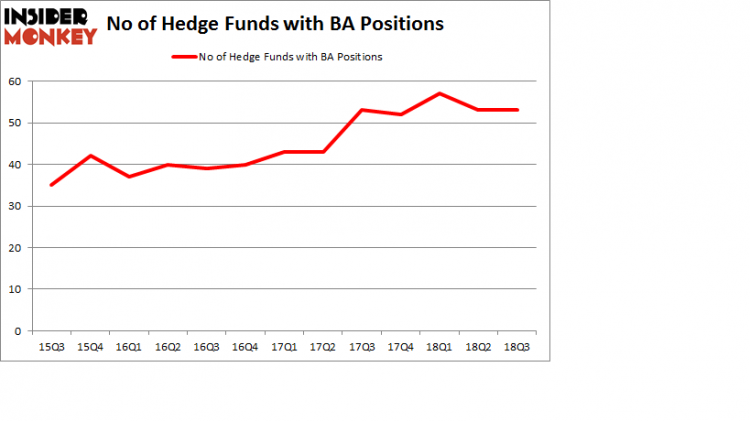 Due to the fact that The Boeing Company (NYSE:BA) has experienced falling interest from hedge fund managers, it’s easy to see that there is a sect of money managers that decided to sell off their positions entirely by the end of the third quarter. Interestingly, Zach Schreiber’s Point State Capital said goodbye to the biggest stake of the 700 funds tracked by Insider Monkey, valued at about $97.3 million in stock. Benjamin A. Smith’s fund, Laurion Capital Management, also dropped its stock, about $52.9 million worth. These bearish behaviors are important to note, as total hedge fund interest stayed the same (this is a bearish signal in our experience).

As you can see these stocks had an average of 35 hedge funds with bullish positions and the average amount invested in these stocks was $7.81 billion. That figure was $3.75 billion in BA’s case. The Procter & Gamble Company (NYSE:PG) is the most popular stock in this table. On the other hand China Mobile Limited (NYSE:CHL) is the least popular one with only 15 bullish hedge fund positions. The Boeing Company (NYSE:BA) is not the most popular stock in this group but hedge fund interest is still above average. This is a slightly positive signal but we’d rather spend our time researching stocks that hedge funds are piling on. In this regard PG might be a better candidate to consider a long position.