Hedge Funds and other institutional investors have just completed filing their 13Fs with the Securities and Exchange Commission, revealing their equity portfolios as of the end of September. At Insider Monkey, we follow over 700 of the best-performing investors and by analyzing their 13F filings, we can determine the stocks that they are collectively bullish on. One of their picks is Teradata Corporation (NYSE:TDC), so let’s take a closer look at the sentiment that surrounds it in the current quarter.

Teradata Corporation (NYSE:TDC) has experienced an increase in enthusiasm from smart money of late. Our calculations also showed that TDC isn’t among the 30 most popular stocks among hedge funds. 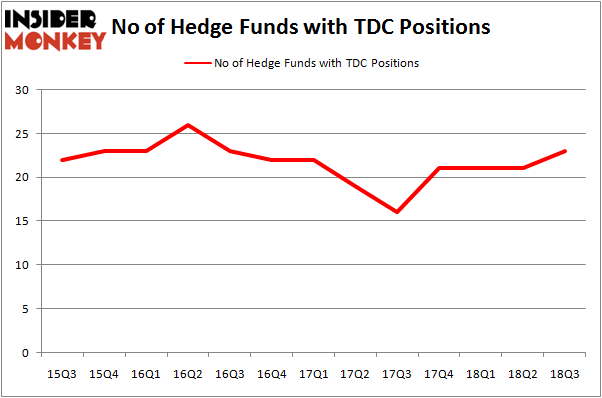 Among these funds, Praesidium Investment Management Company held the most valuable stake in Teradata Corporation (NYSE:TDC), which was worth $54.5 million at the end of the third quarter. On the second spot was Balyasny Asset Management which amassed $52.4 million worth of shares. Moreover, Renaissance Technologies, Balyasny Asset Management, and Millennium Management were also bullish on Teradata Corporation (NYSE:TDC), allocating a large percentage of their portfolios to this stock.

As you can see these stocks had an average of 15.75 hedge funds with bullish positions and the average amount invested in these stocks was $370 million. That figure was $254 million in TDC’s case. Agios Pharmaceuticals Inc (NASDAQ:AGIO) is the most popular stock in this table. On the other hand Enstar Group Ltd. (NASDAQ:ESGR) is the least popular one with only 10 bullish hedge fund positions. Compared to these stocks Teradata Corporation (NYSE:TDC) is more popular among hedge funds. Considering that hedge funds are fond of this stock in relation to its market cap peers, it may be a good idea to analyze it in detail and potentially include it in your portfolio.

Hedge Funds Are Buying CBL & Associates Properties, Inc. (CBL)
Monthly Newsletter Strategy
Download a free copy of our newsletter and see the details inside!
Hedge Fund Resource Center
Related News
Is Teradata Corporation (TDC) A Good Stock To Buy? Here’s Why TASER International, Heron Therapeutics and Three Other Stocks Are Trading Lower on Monday A Closer Look at Five Tech Stocks in Spotlight on Tuesday Why Teradata, Envision Healthcare, LSB Industries & Two Other Stocks Are Among Top Gainers Today? Why These 5 Stocks are Pushing the Market Up on Thursday Hedge Funds Are Selling Teradata Corporation (TDC) Insider Activity At Shutterfly Inc. (SFLY) Amid the Approval of Share Repurchase Plan The 10 Best Islands to Visit in 2019 5 Most Socially Responsible Companies in America 5 Ways You Can Eliminate Credit Card Debt
Billionaire Hedge Funds