Is TDY A Good Stock To Buy According To Hedge Funds?

In this article we are going to use hedge fund sentiment as a tool and determine whether Teledyne Technologies Incorporated (NYSE:TDY) is a good investment right now. We like to analyze hedge fund sentiment before conducting days of in-depth research. We do so because hedge funds and other elite investors have numerous Ivy League graduates, expert network advisers, and supply chain tipsters working or consulting for them. There is not a shortage of news stories covering failed hedge fund investments and it is a fact that hedge funds’ picks don’t beat the market 100% of the time, but their consensus picks have historically done very well and have outperformed the market after adjusting for risk.

Is TDY a good stock to buy? Teledyne Technologies Incorporated (NYSE:TDY) has experienced a decrease in activity from the world’s largest hedge funds in recent months. Teledyne Technologies Incorporated (NYSE:TDY) was in 31 hedge funds’ portfolios at the end of the third quarter of 2020. The all time high for this statistic is 34. Our calculations also showed that TDY isn’t among the 30 most popular stocks among hedge funds (click for Q3 rankings and see the video for a quick look at the top 5 stocks).

To most market participants, hedge funds are seen as worthless, outdated financial tools of the past. While there are greater than 8000 funds in operation today, Our researchers hone in on the upper echelon of this group, about 850 funds. It is estimated that this group of investors handle the majority of the hedge fund industry’s total asset base, and by keeping track of their finest stock picks, Insider Monkey has uncovered various investment strategies that have historically surpassed the market. Insider Monkey’s flagship short hedge fund strategy surpassed the S&P 500 short ETFs by around 20 percentage points a year since its inception in March 2017. Our portfolio of short stocks lost 13% since February 2017 (through November 17th) even though the market was up 65% during the same period. We just shared a list of 6 short targets in our latest quarterly update .

At Insider Monkey we leave no stone unturned when looking for the next great investment idea. For example, the House passed a landmark bill decriminalizing marijuana. So, we are checking out this under the radar cannabis stock right now. We go through lists like the 15 best blue chip stocks to buy to pick the best large-cap stocks to buy. Even though we recommend positions in only a tiny fraction of the companies we analyze, we check out as many stocks as we can. We read hedge fund investor letters and listen to stock pitches at hedge fund conferences. You can subscribe to our free daily newsletter on our website. Now we’re going to review the key hedge fund action surrounding Teledyne Technologies Incorporated (NYSE:TDY).

Do Hedge Funds Think TDY Is A Good Stock To Buy Now?

Heading into the fourth quarter of 2020, a total of 31 of the hedge funds tracked by Insider Monkey were long this stock, a change of -9% from one quarter earlier. Below, you can check out the change in hedge fund sentiment towards TDY over the last 21 quarters. So, let’s examine which hedge funds were among the top holders of the stock and which hedge funds were making big moves. 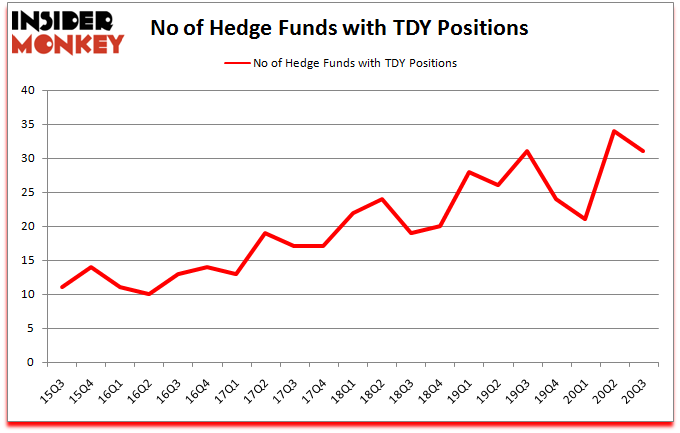 More specifically, Fisher Asset Management was the largest shareholder of Teledyne Technologies Incorporated (NYSE:TDY), with a stake worth $66.8 million reported as of the end of September. Trailing Fisher Asset Management was East Side Capital (RR Partners), which amassed a stake valued at $47.1 million. Millennium Management, Cardinal Capital, and Select Equity Group were also very fond of the stock, becoming one of the largest hedge fund holders of the company. In terms of the portfolio weights assigned to each position East Side Capital (RR Partners) allocated the biggest weight to Teledyne Technologies Incorporated (NYSE:TDY), around 8.14% of its 13F portfolio. Cardinal Capital is also relatively very bullish on the stock, dishing out 1.35 percent of its 13F equity portfolio to TDY.

Judging by the fact that Teledyne Technologies Incorporated (NYSE:TDY) has witnessed declining sentiment from the smart money, logic holds that there was a specific group of hedge funds that elected to cut their positions entirely heading into Q4. Intriguingly, Dmitry Balyasny’s Balyasny Asset Management dropped the largest stake of the “upper crust” of funds tracked by Insider Monkey, comprising about $16.6 million in stock, and Michael Gelband’s ExodusPoint Capital was right behind this move, as the fund sold off about $3.2 million worth. These moves are intriguing to say the least, as aggregate hedge fund interest dropped by 3 funds heading into Q4.

As you can see these stocks had an average of 24.4 hedge funds with bullish positions and the average amount invested in these stocks was $538 million. That figure was $343 million in TDY’s case. The Liberty SiriusXM Group (NASDAQ:LSXMA) is the most popular stock in this table. On the other hand Natura &Co Holding S.A. (NYSE:NTCO) is the least popular one with only 4 bullish hedge fund positions. Teledyne Technologies Incorporated (NYSE:TDY) is not the most popular stock in this group but hedge fund interest is still above average. Our overall hedge fund sentiment score for TDY is 64.9. Stocks with higher number of hedge fund positions relative to other stocks as well as relative to their historical range receive a higher sentiment score. Our calculations showed that top 20 most popular stocks among hedge funds returned 41.3% in 2019 and outperformed the S&P 500 ETF (SPY) by 10 percentage points. These stocks gained 33.3% in 2020 through December 18th and still beat the market by 16.4 percentage points. Hedge funds were also right about betting on TDY as the stock returned 22.6% since the end of Q3 (through 12/18) and outperformed the market. Hedge funds were rewarded for their relative bullishness.

Is TDY A Good Investment Right Now?Is TDY A Good Stock To Buy?NYSE:TDYSentiment Score Between 60 and 70Yahoo Finance