Is TCP Capital Corp (NASDAQ:TCPC) a healthy stock for your portfolio? The smart money is taking a bullish view. The number of bullish hedge fund positions rose by 1 lately. Our calculations also showed that TCPC isn’t among the 30 most popular stocks among hedge funds.

Heading into the fourth quarter of 2018, a total of 10 of the hedge funds tracked by Insider Monkey were bullish on this stock, a change of 11% from the previous quarter. The graph below displays the number of hedge funds with bullish position in TCPC over the last 13 quarters. With the smart money’s sentiment swirling, there exists a few noteworthy hedge fund managers who were upping their stakes meaningfully (or already accumulated large positions). 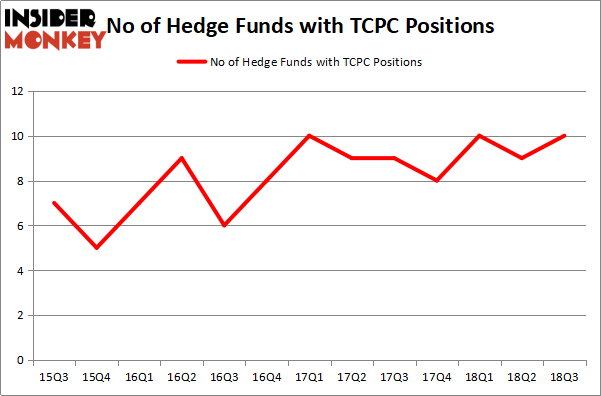 When looking at the institutional investors followed by Insider Monkey, Israel Englander’s Millennium Management has the number one position in TCP Capital Corp (NASDAQ:TCPC), worth close to $5.2 million, corresponding to less than 0.1%% of its total 13F portfolio. On Millennium Management’s heels is Two Sigma Advisors, managed by John Overdeck and David Siegel, which holds a $3.9 million position; less than 0.1%% of its 13F portfolio is allocated to the company. Some other peers with similar optimism include D. E. Shaw’s D E Shaw, Robert B. Gillam’s McKinley Capital Management and Peter A. Wright’s P.A.W. CAPITAL PARTNERS.

As one would reasonably expect, key money managers were leading the bulls’ herd. Millennium Management, managed by Israel Englander, assembled the most valuable position in TCP Capital Corp (NASDAQ:TCPC). Millennium Management had $5.2 million invested in the company at the end of the quarter. John Overdeck and David Siegel’s Two Sigma Advisors also made a $3.9 million investment in the stock during the quarter. The following funds were also among the new TCPC investors: D. E. Shaw’s D E Shaw, Robert B. Gillam’s McKinley Capital Management, and Peter A. Wright’s P.A.W. CAPITAL PARTNERS.

As you can see these stocks had an average of 11.25 hedge funds with bullish positions and the average amount invested in these stocks was $107 million. That figure was $19 million in TCPC’s case. 0 is the most popular stock in this table. On the other hand P.H. Glatfelter Company (NYSE:GLT) is the least popular one with only 4 bullish hedge fund positions. TCP Capital Corp (NASDAQ:TCPC) is not the least popular stock in this group but hedge fund interest is still below average. This is a slightly negative signal and we’d rather spend our time researching stocks that hedge funds are piling on. In this regard BCRX might be a better candidate to consider a long position.