Is TAP A Good Stock To Buy According To Hedge Funds?

We know that hedge funds generate strong, risk-adjusted returns over the long run, therefore imitating the picks that they are collectively bullish on can be a profitable strategy for retail investors. With billions of dollars in assets, smart money investors have to conduct complex analyses, spend many resources and use tools that are not always available for the general crowd. This doesn’t mean that they don’t have occasional colossal losses; they do (like Peltz’s recent General Electric losses). However, it is still a good idea to keep an eye on hedge fund activity. With this in mind, as the current round of 13F filings has just ended, let’s examine the smart money sentiment towards Molson Coors Beverage Company (NYSE:TAP).

Is TAP a good stock to buy? Money managers were becoming less confident. The number of bullish hedge fund positions fell by 3 lately. Molson Coors Beverage Company (NYSE:TAP) was in 33 hedge funds’ portfolios at the end of the third quarter of 2020. The all time high for this statistic is 70. Our calculations also showed that TAP isn’t among the 30 most popular stocks among hedge funds (click for Q3 rankings and see the video for a quick look at the top 5 stocks). There were 36 hedge funds in our database with TAP holdings at the end of June.

According to most market participants, hedge funds are viewed as underperforming, outdated financial tools of yesteryear. While there are more than 8000 funds in operation at the moment, We look at the elite of this club, around 850 funds. These hedge fund managers manage the majority of all hedge funds’ total capital, and by tailing their best stock picks, Insider Monkey has identified several investment strategies that have historically outrun the market. Insider Monkey’s flagship short hedge fund strategy outpaced the S&P 500 short ETFs by around 20 percentage points a year since its inception in March 2017. Our portfolio of short stocks lost 13% since February 2017 (through November 17th) even though the market was up 65% during the same period. We just shared a list of 6 short targets in our latest quarterly update .

At Insider Monkey we leave no stone unturned when looking for the next great investment idea. For example, the House passed a landmark bill decriminalizing marijuana. So, we are checking out this under the radar cannabis stock right now. We go through lists like the 15 best blue chip stocks to buy to pick the best large-cap stocks to buy. Even though we recommend positions in only a tiny fraction of the companies we analyze, we check out as many stocks as we can. We read hedge fund investor letters and listen to stock pitches at hedge fund conferences. You can subscribe to our free daily newsletter on our website. Now we’re going to take a look at the recent hedge fund action encompassing Molson Coors Beverage Company (NYSE:TAP).

Do Hedge Funds Think TAP Is A Good Stock To Buy Now? 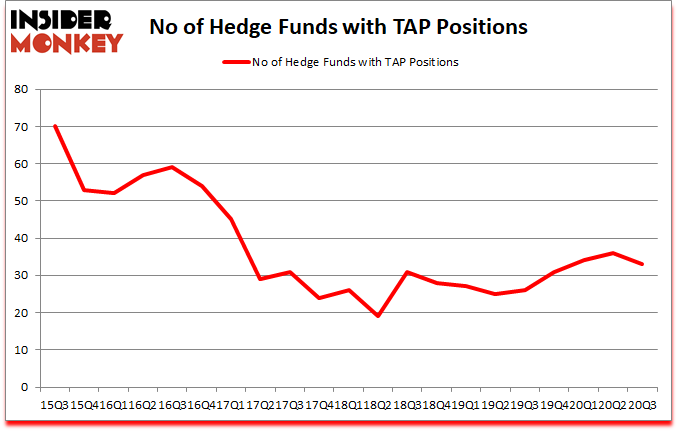 According to publicly available hedge fund and institutional investor holdings data compiled by Insider Monkey, Peter Rathjens, Bruce Clarke and John Campbell’s Arrowstreet Capital has the largest position in Molson Coors Beverage Company (NYSE:TAP), worth close to $57.8 million, accounting for 0.1% of its total 13F portfolio. Coming in second is Cliff Asness of AQR Capital Management, with a $48.9 million position; the fund has 0.1% of its 13F portfolio invested in the stock. Some other hedge funds and institutional investors that hold long positions include D. E. Shaw’s D E Shaw, Seth Rosen’s Nitorum Capital and Ric Dillon’s Diamond Hill Capital. In terms of the portfolio weights assigned to each position Callodine Capital Management allocated the biggest weight to Molson Coors Beverage Company (NYSE:TAP), around 3.57% of its 13F portfolio. Fairpointe Capital is also relatively very bullish on the stock, setting aside 3.43 percent of its 13F equity portfolio to TAP.

Because Molson Coors Beverage Company (NYSE:TAP) has witnessed declining sentiment from the entirety of the hedge funds we track, logic holds that there were a few funds who sold off their entire stakes heading into Q4. At the top of the heap, Qing Li’s Sciencast Management said goodbye to the largest position of the 750 funds followed by Insider Monkey, comprising an estimated $2.3 million in stock. Karim Abbadi and Edward McBride’s fund, Centiva Capital, also said goodbye to its stock, about $1.5 million worth. These moves are interesting, as aggregate hedge fund interest fell by 3 funds heading into Q4.

As you can see these stocks had an average of 29.9 hedge funds with bullish positions and the average amount invested in these stocks was $1220 million. That figure was $317 million in TAP’s case. The New York Times Company (NYSE:NYT) is the most popular stock in this table. On the other hand Assurant, Inc. (NYSE:AIZ) is the least popular one with only 23 bullish hedge fund positions. Molson Coors Beverage Company (NYSE:TAP) is not the most popular stock in this group but hedge fund interest is still above average. Our overall hedge fund sentiment score for TAP is 38.9. Stocks with higher number of hedge fund positions relative to other stocks as well as relative to their historical range receive a higher sentiment score. Our calculations showed that top 20 most popular stocks among hedge funds returned 41.3% in 2019 and outperformed the S&P 500 ETF (SPY) by 10 percentage points. These stocks gained 33.3% in 2020 through December 18th and still beat the market by 16.4 percentage points. Hedge funds were also right about betting on TAP as the stock returned 35.6% since the end of Q3 (through 12/18) and outperformed the market. Hedge funds were rewarded for their relative bullishness.

Is TAP A Good Investment Right Now?Is TAP A Good Stock To Buy?NYSE:TAPSentiment Score Between 30 and 40Yahoo Finance