Investing in small cap stocks has historically been a way to outperform the market, as small cap companies typically grow faster on average than the blue chips. That outperformance comes with a price, however, as there are occasional periods of higher volatility. The last 8 months is one of those periods, as the Russell 2000 ETF (IWM) has underperformed the larger S&P 500 ETF (SPY) by nearly 9 percentage points. Given that the funds we track tend to have a disproportionate amount of their portfolios in smaller cap stocks, they have seen some volatility in their portfolios too. Actually their moves are potentially one of the factors that contributed to this volatility. In this article, we use our extensive database of hedge fund holdings to find out what the smart money thinks of Taiwan Semiconductor Mfg. Co. Ltd. (NYSE:TSM).

Taiwan Semiconductor Mfg. Co. Ltd. (NYSE:TSM) has experienced an increase in support from the world’s most elite money managers recently. Our calculations also showed that TSM isn’t among the 30 most popular stocks among hedge funds.

What have hedge funds been doing with Taiwan Semiconductor Mfg. Co. Ltd. (NYSE:TSM)? 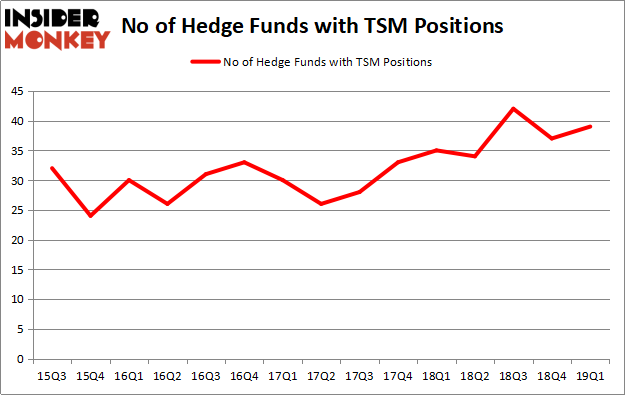 More specifically, Fisher Asset Management was the largest shareholder of Taiwan Semiconductor Mfg. Co. Ltd. (NYSE:TSM), with a stake worth $1337.2 million reported as of the end of March. Trailing Fisher Asset Management was Renaissance Technologies, which amassed a stake valued at $354.6 million. AQR Capital Management, Orbis Investment Management, and Lansdowne Partners were also very fond of the stock, giving the stock large weights in their portfolios.

As you can see these stocks had an average of 58.25 hedge funds with bullish positions and the average amount invested in these stocks was $8283 million. That figure was $3547 million in TSM’s case. The Walt Disney Company (NYSE:DIS) is the most popular stock in this table. On the other hand China Mobile Limited (NYSE:CHL) is the least popular one with only 19 bullish hedge fund positions. Taiwan Semiconductor Mfg. Co. Ltd. (NYSE:TSM) is not the least popular stock in this group but hedge fund interest is still below average. This is a slightly negative signal and we’d rather spend our time researching stocks that hedge funds are piling on. Our calculations showed that top 20 most popular stocks among hedge funds returned 1.9% in Q2 through May 30th and outperformed the S&P 500 ETF (SPY) by more than 3 percentage points. Unfortunately TSM wasn’t nearly as popular as these 20 stocks (hedge fund sentiment was quite bearish); TSM investors were disappointed as the stock returned -7.1% during the same time period and underperformed the market. If you are interested in investing in large cap stocks with huge upside potential, you should check out the top 20 most popular stocks among hedge funds as 13 of these stocks already outperformed the market so far in Q2.