Is Tailored Brands, Inc. (TLRD) A Good Stock To Buy ?

A whopping number of 13F filings filed with U.S. Securities and Exchange Commission has been processed by Insider Monkey so that individual investors can look at the overall hedge fund sentiment towards the stocks included in their watchlists. These freshly-submitted public filings disclose money managers’ equity positions as of the end of the three-month period that ended March 31, so let’s proceed with the discussion of the hedge fund sentiment on Tailored Brands, Inc. (NYSE:TLRD).

Hedge fund interest in Tailored Brands, Inc. (NYSE:TLRD) shares was flat at the end of last quarter. This is usually a negative indicator. At the end of this article we will also compare TLRD to other stocks including Progenics Pharmaceuticals, Inc. (NASDAQ:PGNX), Golden Entertainment Inc (NASDAQ:GDEN), and Gores Metropoulos, Inc. (NASDAQ:GMHI) to get a better sense of its popularity.

How have hedgies been trading Tailored Brands, Inc. (NYSE:TLRD)?

Heading into the second quarter of 2019, a total of 18 of the hedge funds tracked by Insider Monkey were long this stock, a change of 0% from the fourth quarter of 2018. Below, you can check out the change in hedge fund sentiment towards TLRD over the last 15 quarters. With the smart money’s capital changing hands, there exists an “upper tier” of key hedge fund managers who were boosting their holdings significantly (or already accumulated large positions). 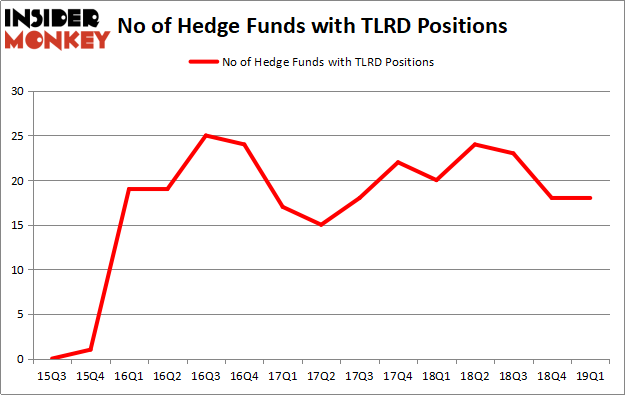 Of the funds tracked by Insider Monkey, Millennium Management, managed by Israel Englander, holds the biggest position in Tailored Brands, Inc. (NYSE:TLRD). Millennium Management has a $9.5 million position in the stock, comprising less than 0.1%% of its 13F portfolio. The second largest stake is held by Michael Burry of Scion Asset Management, with a $6.8 million position; 6.9% of its 13F portfolio is allocated to the stock. Some other hedge funds and institutional investors that are bullish consist of Ken Griffin’s Citadel Investment Group, Cliff Asness’s AQR Capital Management and Jim Simons’s Renaissance Technologies.

Due to the fact that Tailored Brands, Inc. (NYSE:TLRD) has witnessed declining sentiment from the aggregate hedge fund industry, it’s easy to see that there exists a select few funds that slashed their full holdings heading into Q3. Intriguingly, Ken Grossman and Glen Schneider’s SG Capital Management dropped the largest position of the “upper crust” of funds followed by Insider Monkey, worth about $13 million in stock, and John W. Moon’s Moon Capital was right behind this move, as the fund cut about $7.5 million worth. These moves are important to note, as aggregate hedge fund interest stayed the same (this is a bearish signal in our experience).

As you can see these stocks had an average of 12 hedge funds with bullish positions and the average amount invested in these stocks was $83 million. That figure was $54 million in TLRD’s case. Gores Metropoulos, Inc. (NASDAQ:GMHI) is the most popular stock in this table. On the other hand Bank First National Corporation (NASDAQ:BFC) is the least popular one with only 4 bullish hedge fund positions. Tailored Brands, Inc. (NYSE:TLRD) is not the most popular stock in this group but hedge fund interest is still above average. This is a slightly positive signal but we’d rather spend our time researching stocks that hedge funds are piling on. Our calculations showed that top 20 most popular stocks among hedge funds returned 6.2% in Q2 through June 19th and outperformed the S&P 500 ETF (SPY) by nearly 3 percentage points. Unfortunately TLRD wasn’t nearly as popular as these 20 stocks and hedge funds that were betting on TLRD were disappointed as the stock returned -28.9% during the same period and underperformed the market. If you are interested in investing in large cap stocks with huge upside potential, you should check out the top 20 most popular stocks among hedge funds as 13 of these stocks already outperformed the market so far in Q2.