As we already know from media reports and hedge fund investor letters, many hedge funds lost money in October, blaming macroeconomic conditions and unpredictable events that hit several sectors, with healthcare among them. Nevertheless, most investors decided to stick to their bullish theses and their long-term focus allows us to profit from the recent declines. In particular, let’s take a look at what hedge funds think about SunTrust Banks, Inc. (NYSE:STI) in this article.

SunTrust Banks, Inc. (NYSE:STI) has seen a decrease in activity from the world’s largest hedge funds lately. STI was in 22 hedge funds’ portfolios at the end of September. There were 25 hedge funds in our database with STI holdings at the end of the previous quarter. Our calculations also showed that sti isn’t among the 30 most popular stocks among hedge funds.

At the end of the third quarter, a total of 22 of the hedge funds tracked by Insider Monkey were bullish on this stock, a change of -12% from the second quarter of 2018. The graph below displays the number of hedge funds with bullish position in STI over the last 13 quarters. With hedgies’ sentiment swirling, there exists a few notable hedge fund managers who were boosting their stakes meaningfully (or already accumulated large positions). 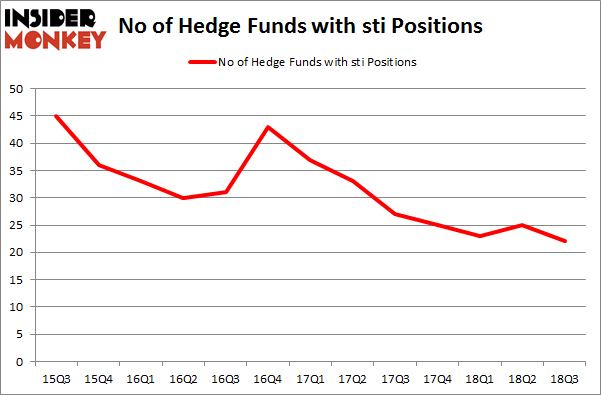 Because SunTrust Banks, Inc. (NYSE:STI) has faced a decline in interest from the smart money, logic holds that there lies a certain “tier” of fund managers that decided to sell off their positions entirely by the end of the third quarter. It’s worth mentioning that Charles Davidson and Joseph Jacobs’s Wexford Capital dropped the biggest stake of the 700 funds followed by Insider Monkey, totaling about $3.8 million in stock, and Steve Cohen’s Point72 Asset Management was right behind this move, as the fund sold off about $3.3 million worth. These transactions are intriguing to say the least, as aggregate hedge fund interest dropped by 3 funds by the end of the third quarter.

As you can see these stocks had an average of 31 hedge funds with bullish positions and the average amount invested in these stocks was $1.30 billion. That figure was $319 million in STI’s case. Roper Industries, Inc. (NYSE:ROP) is the most popular stock in this table. On the other hand TE Connectivity Ltd. (NYSE:TEL) is the least popular one with only 30 bullish hedge fund positions. Compared to these stocks SunTrust Banks, Inc. (NYSE:STI) is even less popular than TEL. Considering that hedge funds aren’t fond of this stock in relation to other companies analyzed in this article, it may be a good idea to analyze it in detail and understand why the smart money isn’t behind this stock. This isn’t necessarily bad news. Although it is possible that hedge funds may think the stock is overpriced and view the stock as a short candidate, they may not be very familiar with the bullish thesis. In either case more research is warranted.