Summit Materials Inc (NYSE:SUM) was in 21 hedge funds’ portfolios at the end of September. SUM investors should be aware of a decrease in enthusiasm from smart money lately. There were 27 hedge funds in our database with SUM positions at the end of the previous quarter. Our calculations also showed that SUM isn’t among the 30 most popular stocks among hedge funds.

What does the smart money think about Summit Materials Inc (NYSE:SUM)? 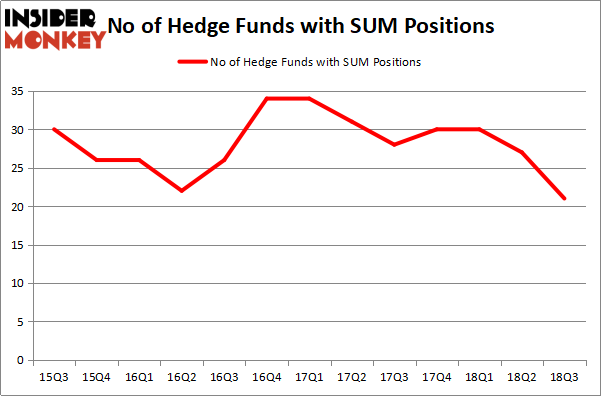 Among these funds, Southeastern Asset Management held the most valuable stake in Summit Materials Inc (NYSE:SUM), which was worth $168.2 million at the end of the third quarter. On the second spot was Adage Capital Management which amassed $94.1 million worth of shares. Moreover, Three Bays Capital, Luminus Management, and Appaloosa Management LP were also bullish on Summit Materials Inc (NYSE:SUM), allocating a large percentage of their portfolios to this stock.

Since Summit Materials Inc (NYSE:SUM) has witnessed falling interest from hedge fund managers, logic holds that there is a sect of hedgies who were dropping their positions entirely last quarter. At the top of the heap, John A. Levin’s Levin Capital Strategies sold off the biggest investment of the 700 funds followed by Insider Monkey, valued at about $50.8 million in stock. Robert Pitts’s fund, Steadfast Capital Management, also sold off its stock, about $39.3 million worth. These moves are interesting, as aggregate hedge fund interest dropped by 6 funds last quarter.

As you can see these stocks had an average of 17.25 hedge funds with bullish positions and the average amount invested in these stocks was $194 million. That figure was $570 million in SUM’s case. Taylor Morrison Home Corp (NYSE:TMHC) is the most popular stock in this table. On the other hand Evoqua Water Technologies Corp. (NYSE:AQUA) is the least popular one with only 11 bullish hedge fund positions. Summit Materials Inc (NYSE:SUM) is not the most popular stock in this group but hedge fund interest is still above average. This is a slightly positive signal but we’d rather spend our time researching stocks that hedge funds are piling on. In this regard TMHC might be a better candidate to consider a long position.