Is STMicroelectronics NV (ADR) (STM) A Good Stock To Buy?

Several hedge fund billionaires took advantage of the sharp declines in broader market indices during the five hours following Donald Trump’s election victory. In this case markets wised up pretty quickly and the selloffs turned into rallies. Information disseminates very quickly in liquid markets, however, the rate of adjustment is usually slower when it comes to much smaller and less liquid markets. By tracking the hedge fund sentiment in publicly traded US stocks Insider Monkey aims to tap into hedge funds’ wisdom without paying them an arm and a leg. Historically their stock picks in small-cap stocks proved to be the most profitable. Let’s study the hedge fund sentiment to see how recent events affected their ownership of STMicroelectronics NV (ADR) (NYSE:STM) during the third quarter.

Is STMicroelectronics NV (ADR) (NYSE:STM) a sound investment today? It looks like money managers are betting on the stock as the number of bullish hedge fund positions went up by four during the third quarter. At the end of this article we will also compare STM to other stocks including Apollo Global Management LLC (NYSE:APO), Apartment Investment and Management Co. (NYSE:AIV), and Huntington Ingalls Industries Inc (NYSE:HII) to get a better sense of its popularity.

What have hedge funds been doing with STMicroelectronics NV (ADR) (NYSE:STM)?

At the end of the third quarter, 11 funds tracked by Insider Monkey held long positions in this stock, up by 57% from the previous quarter. By comparison, only six hedge funds held shares or bullish call options in STM heading into this year. With hedgies’ positions undergoing their usual ebb and flow, there exists a select group of key hedge fund managers who were upping their stakes substantially (or already accumulated large positions). 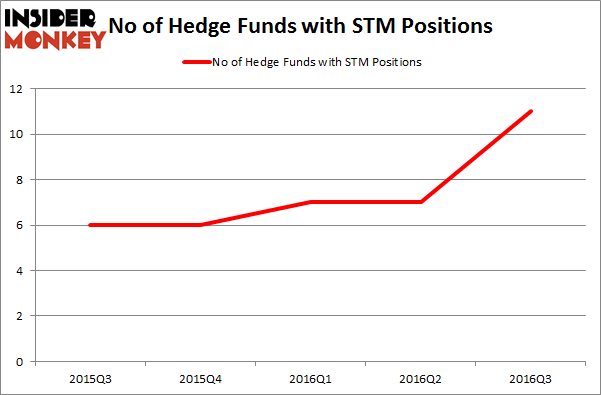 According to Insider Monkey’s hedge fund database, Renaissance Technologies, one of the largest hedge funds in the world, has the biggest position in STMicroelectronics NV (ADR) (NYSE:STM), worth close to $40 million, amounting to 0.1% of its total 13F portfolio. Coming in second is Arrowstreet Capital, led by Peter Rathjens, Bruce Clarke and John Campbell, which holds a $33.1 million position; 0.1% of its 13F portfolio is allocated to the stock. Remaining professional money managers that hold long positions comprise Ernest Chow and Jonathan Howe’s Sensato Capital Management, Israel Englander’s Millennium Management, and Warren Lammert’s Granite Point Capital. We should note that Sensato Capital Management is among our list of the 100 best performing hedge funds which is based on the performance of their 13F long positions in non-microcap stocks.

Why Investors Are Pumped About These 5 Stocks Today

Should You Be Bullish On NetEase, Inc (ADR) (NTES), NVIDIA Corporation (NVDA...