Share Tweet Email
Page 1 of 2
Next >>
See All
Speculation that coffee prices might be bottoming suggests that margins might be squeezed going forward for some of the major coffee companies, including the market leader Starbucks Corporation (NASDAQ:SBUX) . This speculation could present investors with a chance to buy into the coffee giant at a reasonable price, as I believe the stock is a solid long-term pick. Recent quarterly results shows that Starbucks is still firing on all cylinders, being carried by its U.S. segment, but with promising growth opportunities internationally. Overall, the coffee company posted EPS of $0.57 last quarter, up 14% year over year (read more about how hot Starbucks is).
On to the details!  The chart below shows that coffee prices may well be bottoming, and could bounce to become ready for a rise.
This might well be reminiscent of when natural gas fell below $2 and then bounced up. However, one issue with that is that the price of coffee is just now coming back in-line with historical levels, after hitting multi-year highs in 2011.
We are really now just getting back to a normalized trading range. But how much does the price of coffee play into Starbucks’ bottom line? Doesn’t look like much. 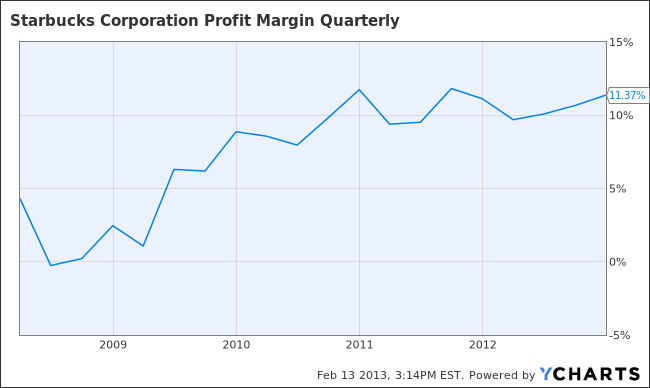 Over the past five years, Starbucks’ has seen a steady uptick in its profit margin despite the surge in coffee prices that took place in 2011. Starbucks also
hedges
its exposure to coffee prices, where at the end of the third quarter the company committed to purchasing green coffee for $557 million under fixed-price contracts and an estimated $297 million under price-to-be-fixed contracts.

Stacking up the competition

Notable competing coffee companies include Green Mountain Coffee Roasters Inc. (NASDAQ:GMCR), Dunkin Brands Group Inc (NASDAQ:DNKN), Tim Hortons Inc. (USA) (NYSE:THI), and The J.M. Smucker Company (NYSE:SJM). Green Mountain is already up 7% year to date after releasing EPS numbers for last quarter that showed $0.76 of earnings per share, compared to $0.60 for the same quarter last year, and beating consensus estimates of $0.64. Billionaire David Einhorn said earlier this month that he’s still short the coffee maker (check out Einhorn’s stocks). This comes after Green Mountain upped its fiscal year 2013 guidance, and is now expecting to post EPS of $2.72 to $2.82 per share, compared to prior estimates of $2.64 to $2.74 per share.

Dunkin’s recent quarterly results were also up year over year, posting EPS of $0.34, compared to $0.30 for the same quarter last year, and compared to consensus of $0.33. The Dunkin story is compelling given that it remains a growth story. The company has opportunities for expansion in the western U.S. and internationally, with plans to open over 700 stores in 2013.

Tim Hortons Inc. (USA) (NYSE:THI) is the quick service coffee shop with a strong presence in Canada. Revenues were up 10% last quarter thanks to expansion efforts, and same store sale growth; 1.9% in Canada and 2.3% in U.S. Smucker is a lesser known company with vast exposure to the coffee markets. In fact Smucker derived almost 50% of its revenue from coffee in 2012. The stock pays a 2.3% dividend yield, but Goldman Sachs recently downgraded the company’s stock price to $93, essentially meaning that the stock trades near fair value.