Dream for Dreamworks Animation Skg Inc (NASDAQ:DWA) has been a bit of a disappointment lately. The company delayed an upcoming film, and news that the company may lay off 500 employees was leaked to the press. However, before we considering shorting this stock in tandem with the deluge of analyst downgrades, we need to consider the fundamental strengths of the company as well. Is DreamWorks’ future nothing but a pipe dream, or will it survive and thrive, evolving into a much stronger animation studio?

DreamWorks Animation was once a business segment of DreamWorks Studios, the entertainment company formed by the Hollywood triumvirate of Steven Spielberg, Jeffrey Katzenberg and David Geffen. DreamWorks Animation was spun off in October 2004 to oversee its profitable computer-generated animation franchises — which now include Shrek, Madagascar, Kung Fu Panda and Puss in Boots.

Since its market debut, however, the stock has lost 57% of its value, due to increased competition from The Walt Disney Company (NYSE:DIS)’s Pixar Studios, which created Toy Story, and News Corp (NASDAQ:NWS).’s Blue Sky Studios, the creators of Ice Age.

As a standalone animation studio, how does DreamWorks’ revenue and earnings growth compare to its much larger competitors? 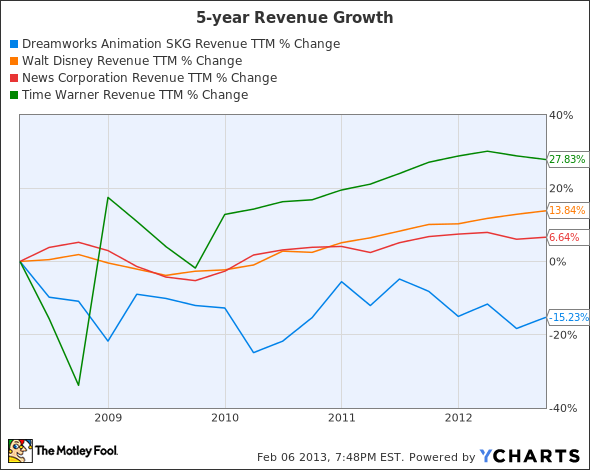 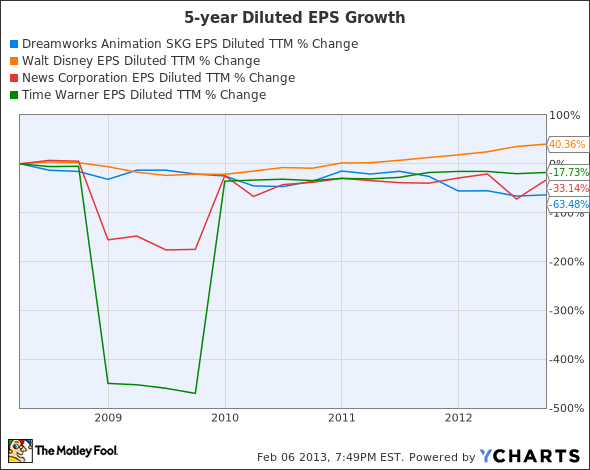 DreamWorks woefully underperforms these media giants by a wide margin, despite releasing similar computer-generated films. The difference is business segment diversification, which we will discuss below.

DreamWorks is still an undeniable force in modern animation. Let’s take a look at the 10 most profitable CG (computer generated) films ever made, with their domestic revenue adjusted for inflation.

Although Pixar dominates this list, DreamWorks puts up a good fight claiming three of the top spots with a single franchise.

Therein lies the problem — although DreamWorks was able to milk the green ogre’s franchise for nearly a decade, the company realized that diminishing returns had finally arrived with Shrek Forever After, which grossed $238.4 million — 64% of its predecessor, Shrek the Third.

While DreamWorks has had success with Kung Fu Panda and Madagascar, neither film nor their sequels have been able to measure up to Shrek’s profitability.

Do we put two or three eggs in the basket?

Going forward, this puts DreamWorks at a major disadvantage versus its media industry peers. The company, with all its eggs in a basket, is simply not diversified enough to absorb box office bombs and delayed releases.

While Disney, News Corp., or Time Warner Inc. (NYSE:TWX) can easily use gains from other divisions, such as content providing networks, to offset studio losses, DreamWorks has no such cushion. For example, the lackluster opening of DreamWorks’ Rise of the Guardians last fall, which opened at $23.8 million, immediately caused its stock to tumble 5% the following Monday.

In response, the company is accelerating its release schedule, aiming to release three annual films instead of two between 2013 and 2016. While offering an additional film may stabilize revenue and earnings slightly, each release is still a big gamble for the studio.