Is Spirit Realty Capital Inc (NYSE:SRC) a good stock to buy right now? We at Insider Monkey like to examine what billionaires and hedge funds think of a company before doing days of research on it. Given their 2 and 20 payment structure, hedge funds have more incentives and resources than the average investor. The funds have access to expert networks and get tips from industry insiders. They also have numerous Ivy League graduates and MBAs. Like everyone else, hedge funds perform miserably at times, but their consensus picks have historically outperformed the market after risk adjustments.

Spirit Realty Capital Inc (NYSE:SRC) was in 17 hedge funds’ portfolios at the end of the first quarter of 2019. SRC investors should be aware of a decrease in activity from the world’s largest hedge funds lately. There were 19 hedge funds in our database with SRC positions at the end of the previous quarter. Our calculations also showed that SRC isn’t among the 30 most popular stocks among hedge funds.

At the end of the first quarter, a total of 17 of the hedge funds tracked by Insider Monkey held long positions in this stock, a change of -11% from the previous quarter. Below, you can check out the change in hedge fund sentiment towards SRC over the last 15 quarters. With hedge funds’ positions undergoing their usual ebb and flow, there exists a select group of key hedge fund managers who were increasing their stakes significantly (or already accumulated large positions). 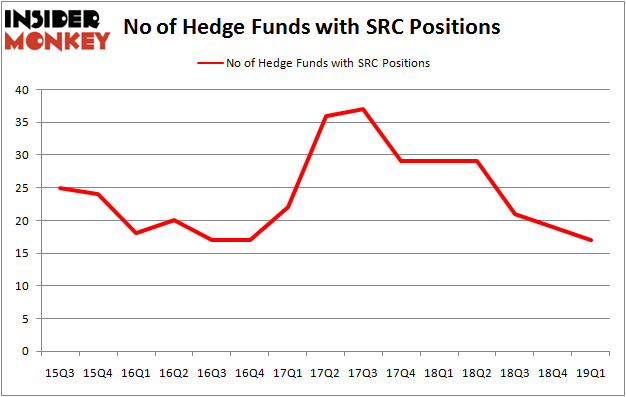 According to publicly available hedge fund and institutional investor holdings data compiled by Insider Monkey, Scopia Capital, managed by Matt Sirovich and Jeremy Mindich, holds the number one position in Spirit Realty Capital Inc (NYSE:SRC). Scopia Capital has a $102.6 million position in the stock, comprising 3.8% of its 13F portfolio. The second most bullish fund manager is Renaissance Technologies, led by Jim Simons, holding a $67.1 million position; the fund has 0.1% of its 13F portfolio invested in the stock. Some other peers that are bullish comprise Greg Poole’s Echo Street Capital Management, Peter Rathjens, Bruce Clarke and John Campbell’s Arrowstreet Capital and John Khoury’s Long Pond Capital.

Because Spirit Realty Capital Inc (NYSE:SRC) has witnessed declining sentiment from the entirety of the hedge funds we track, we can see that there lies a certain “tier” of money managers that decided to sell off their positions entirely in the third quarter. At the top of the heap, Eduardo Abush’s Waterfront Capital Partners cut the biggest investment of the “upper crust” of funds followed by Insider Monkey, totaling an estimated $15.4 million in stock. Israel Englander’s fund, Millennium Management, also said goodbye to its stock, about $12.5 million worth. These bearish behaviors are intriguing to say the least, as aggregate hedge fund interest fell by 2 funds in the third quarter.

As you can see these stocks had an average of 20 hedge funds with bullish positions and the average amount invested in these stocks was $280 million. That figure was $301 million in SRC’s case. FireEye Inc (NASDAQ:FEYE) is the most popular stock in this table. On the other hand Copa Holdings, S.A. (NYSE:CPA) is the least popular one with only 14 bullish hedge fund positions. Spirit Realty Capital Inc (NYSE:SRC) is not the least popular stock in this group but hedge fund interest is still below average. Our calculations showed that top 20 most popular stocks among hedge funds returned 6.2% in Q2 through June 19th and outperformed the S&P 500 ETF (SPY) by nearly 3 percentage points. A small number of hedge funds were also right about betting on SRC as the stock returned 12.8% during the same time frame and outperformed the market by an even larger margin.