Spectrum Brands Holdings, Inc. (NYSE:SPB) investors should pay attention to a decrease in hedge fund interest lately. Our calculations also showed that SPB isn’t among the 30 most popular stocks among hedge funds.

What does the smart money think about Spectrum Brands Holdings, Inc. (NYSE:SPB)?

Heading into the second quarter of 2019, a total of 22 of the hedge funds tracked by Insider Monkey were long this stock, a change of -12% from the previous quarter. Below, you can check out the change in hedge fund sentiment towards SPB over the last 15 quarters. With hedgies’ positions undergoing their usual ebb and flow, there exists an “upper tier” of noteworthy hedge fund managers who were adding to their holdings significantly (or already accumulated large positions). 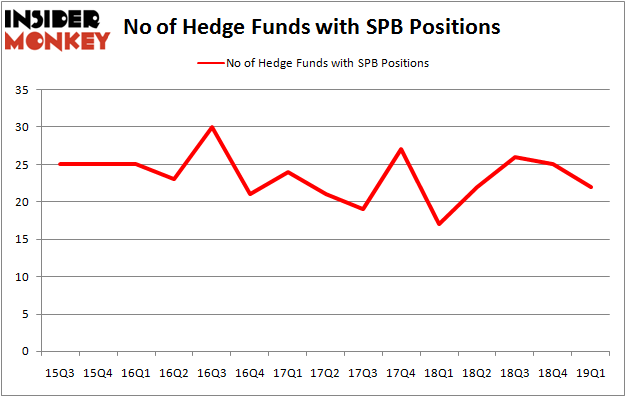 Due to the fact that Spectrum Brands Holdings, Inc. (NYSE:SPB) has faced bearish sentiment from the entirety of the hedge funds we track, it’s safe to say that there lies a certain “tier” of funds that elected to cut their entire stakes last quarter. Intriguingly, Jim Simons’s Renaissance Technologies said goodbye to the biggest stake of all the hedgies watched by Insider Monkey, valued at about $11.1 million in stock. John Overdeck and David Siegel’s fund, Two Sigma Advisors, also said goodbye to its stock, about $1.2 million worth. These moves are intriguing to say the least, as total hedge fund interest fell by 3 funds last quarter.

As you can see these stocks had an average of 18 hedge funds with bullish positions and the average amount invested in these stocks was $242 million. That figure was $837 million in SPB’s case. National Beverage Corp. (NASDAQ:FIZZ) is the most popular stock in this table. On the other hand AppFolio Inc (NASDAQ:APPF) is the least popular one with only 15 bullish hedge fund positions. Compared to these stocks Spectrum Brands Holdings, Inc. (NYSE:SPB) is more popular among hedge funds. Our calculations showed that top 20 most popular stocks among hedge funds returned 1.9% in Q2 through May 30th and outperformed the S&P 500 ETF (SPY) by more than 3 percentage points. Hedge funds were also right about betting on SPB, though not to the same extent, as the stock returned 1.5% during the same period and outperformed the market as well.