Before we spend days researching a stock idea we’d like to take a look at how hedge funds and billionaire investors recently traded that stock. S&P 500 Index ETF (SPY) lost 2.6% in the first two months of the second quarter. Ten out of 11 industry groups in the S&P 500 Index lost value in May. The average return of a randomly picked stock in the index was even worse (-3.6%). This means you (or a monkey throwing a dart) have less than an even chance of beating the market by randomly picking a stock. On the other hand, the top 20 most popular S&P 500 stocks among hedge funds not only generated positive returns but also outperformed the index by about 3 percentage points through May 30th. In this article, we will take a look at what hedge funds think about S&P Global Inc. (NYSE:SPGI).

Hedge fund interest in S&P Global Inc. (NYSE:SPGI) shares was flat at the end of last quarter. This is usually a negative indicator. At the end of this article we will also compare SPGI to other stocks including Raytheon Company (NYSE:RTN), Suncor Energy Inc. (NYSE:SU), and Ecolab Inc. (NYSE:ECL) to get a better sense of its popularity.

At Q1’s end, a total of 54 of the hedge funds tracked by Insider Monkey held long positions in this stock, a change of 0% from the fourth quarter of 2018. By comparison, 51 hedge funds held shares or bullish call options in SPGI a year ago. With the smart money’s capital changing hands, there exists a select group of noteworthy hedge fund managers who were boosting their holdings substantially (or already accumulated large positions). 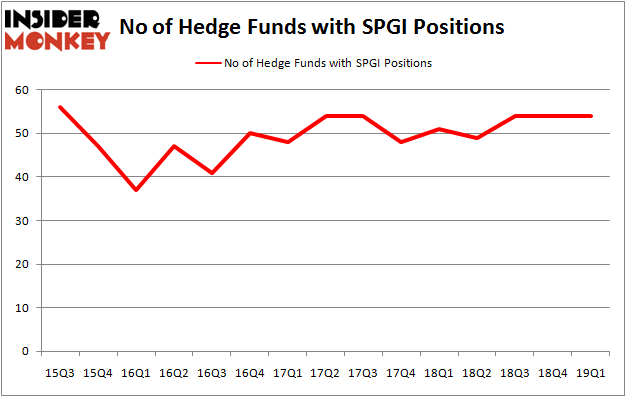 The largest stake in S&P Global Inc. (NYSE:SPGI) was held by Egerton Capital Limited, which reported holding $703.2 million worth of stock at the end of March. It was followed by Lone Pine Capital with a $650.9 million position. Other investors bullish on the company included Cantillon Capital Management, Orbis Investment Management, and D E Shaw.

Since S&P Global Inc. (NYSE:SPGI) has experienced a decline in interest from the smart money, logic holds that there exists a select few hedgies that slashed their positions entirely heading into Q3. It’s worth mentioning that David Cohen and Harold Levy’s Iridian Asset Management sold off the largest stake of all the hedgies followed by Insider Monkey, worth close to $190.9 million in stock. Patrick Degorce’s fund, Theleme Partners, also sold off its stock, about $90.9 million worth. These transactions are important to note, as aggregate hedge fund interest stayed the same (this is a bearish signal in our experience).

As you can see these stocks had an average of 32.75 hedge funds with bullish positions and the average amount invested in these stocks was $1398 million. That figure was $3904 million in SPGI’s case. Raytheon Company (NYSE:RTN) is the most popular stock in this table. On the other hand Ecolab Inc. (NYSE:ECL) is the least popular one with only 27 bullish hedge fund positions. Compared to these stocks S&P Global Inc. (NYSE:SPGI) is more popular among hedge funds. Our calculations showed that top 20 most popular stocks among hedge funds returned 1.9% in Q2 through May 30th and outperformed the S&P 500 ETF (SPY) by more than 3 percentage points. Hedge funds were also right about betting on SPGI as the stock returned 3.4% during the same period and outperformed the market by an even larger margin. Hedge funds were clearly right about piling into this stock relative to other stocks with similar market capitalizations.