During the first half of the fourth quarter the Russell 2000 ETF (IWM) lagged the larger S&P 500 ETF (SPY) by about 4 percentage points as investors worried over the possible ramifications of rising interest rates. The hedge funds and institutional investors we track typically invest more in smaller-cap stocks than an average investor (i.e. only 298 S&P 500 constituents were among the 500 most popular stocks among hedge funds), and we have seen data that shows those funds paring back their overall exposure. Those funds cutting positions in small-caps is one reason why volatility has increased. In the following paragraphs, we take a closer look at what hedge funds and prominent investors think of Southwest Gas Holdings, Inc. (NYSE:SWX) and see how the stock is affected by the recent hedge fund activity.

Hedge fund interest in Southwest Gas Holdings, Inc. (NYSE:SWX) shares was flat at the end of last quarter. This is usually a negative indicator. The level and the change in hedge fund popularity aren’t the only variables you need to analyze to decipher hedge funds’ perspectives. A stock may witness a boost in popularity but it may still be less popular than similarly priced stocks. That’s why at the end of this article we will examine companies such as Taro Pharmaceutical Industries Ltd. (NYSE:TARO), Plains GP Holdings LP (NYSE:PAGP), and BGC Partners, Inc. (NASDAQ:BGCP) to gather more data points.

What does the smart money think about Southwest Gas Holdings, Inc. (NYSE:SWX)?

Heading into the fourth quarter of 2018, a total of 13 of the hedge funds tracked by Insider Monkey held long positions in this stock, no change from the previous quarter. By comparison, 14 hedge funds held shares or bullish call options in SWX heading into this year. With hedgies’ capital changing hands, there exists a select group of notable hedge fund managers who were boosting their stakes meaningfully (or already accumulated large positions). 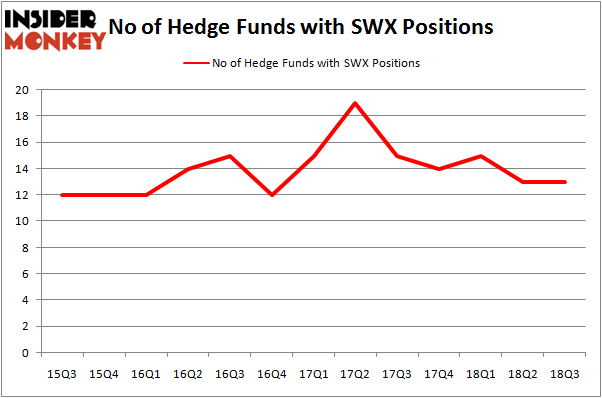 Of the funds tracked by Insider Monkey, GAMCO Investors, managed by Mario Gabelli, holds the most valuable position in Southwest Gas Holdings, Inc. (NYSE:SWX). GAMCO Investors has a $68.7 million position in the stock, comprising 0.5% of its 13F portfolio. The second most bullish fund manager is Adage Capital Management, led by Phill Gross and Robert Atchinson, holding a $57.2 million position; the fund has 0.1% of its 13F portfolio invested in the stock. Remaining hedge funds and institutional investors that hold long positions consist of Israel Englander’s Millennium Management, Cliff Asness’s AQR Capital Management and John Overdeck and David Siegel’s Two Sigma Advisors.

Because Southwest Gas Holdings, Inc. (NYSE:SWX) has witnessed a decline in interest from hedge fund managers, it’s safe to say that there exists a select few money managers who sold off their full holdings by the end of the third quarter. It’s worth mentioning that Jim Simons’s Renaissance Technologies dropped the biggest position of all the hedgies followed by Insider Monkey, worth close to $5.7 million in stock, and D. E. Shaw’s D E Shaw was right behind this move, as the fund said goodbye to about $2.7 million worth. These moves are important to note, as total hedge fund interest stayed the same (this is a bearish signal in our experience).

As you can see these stocks had an average of 22 hedge funds with bullish positions and the average amount invested in these stocks was $289 million. That figure was $178 million in SWX’s case. BGC Partners, Inc. (NASDAQ:BGCP) is the most popular stock in this table. On the other hand Taro Pharmaceutical Industries Ltd. (NYSE:TARO) is the least popular one with only 14 bullish hedge fund positions. Compared to these stocks Southwest Gas Holdings, Inc. (NYSE:SWX) is even less popular than TARO. Considering that hedge funds aren’t fond of this stock in relation to other companies analyzed in this article, it may be a good idea to analyze it in detail and understand why the smart money isn’t behind this stock. This isn’t necessarily bad news. Although it is possible that hedge funds may think the stock is overpriced and view the stock as a short candidate, they may not be very familiar with the bullish thesis. In either case more research is warranted.