Is Southwest Airlines Co. (LUV) A Good Stock To Buy?

As we already know from media reports and hedge fund investor letters, many hedge funds lost money in October, blaming macroeconomic conditions and unpredictable events that hit several sectors, with healthcare among them. Nevertheless, most investors decided to stick to their bullish theses and their long-term focus allows us to profit from the recent declines. In particular, let’s take a look at what hedge funds think about Southwest Airlines Co. (NYSE:LUV) in this article.

Southwest Airlines Co. (NYSE:LUV) investors should pay attention to an increase in enthusiasm from smart money in recent months. Our calculations also showed that LUV isn’t among the 30 most popular stocks among hedge funds.

If you’d ask most investors, hedge funds are perceived as unimportant, outdated investment tools of the past. While there are over 8000 funds trading today, We look at the elite of this group, about 700 funds. These hedge fund managers control the lion’s share of the hedge fund industry’s total capital, and by keeping an eye on their first-class stock picks, Insider Monkey has come up with several investment strategies that have historically outpaced the broader indices. Insider Monkey’s flagship hedge fund strategy beat the S&P 500 index by 6 percentage points annually since its inception in May 2014 through early November 2018. We were able to generate large returns even by identifying short candidates. Our portfolio of short stocks lost 24% since February 2017 (through December 3rd) even though the market was up nearly 23% during the same period. We just shared a list of 11 short targets in our latest quarterly update.

At Q3’s end, a total of 41 of the hedge funds tracked by Insider Monkey were bullish on this stock, a change of 14% from one quarter earlier. On the other hand, there were a total of 52 hedge funds with a bullish position in LUV at the beginning of this year. With hedgies’ positions undergoing their usual ebb and flow, there exists an “upper tier” of noteworthy hedge fund managers who were upping their stakes significantly (or already accumulated large positions). 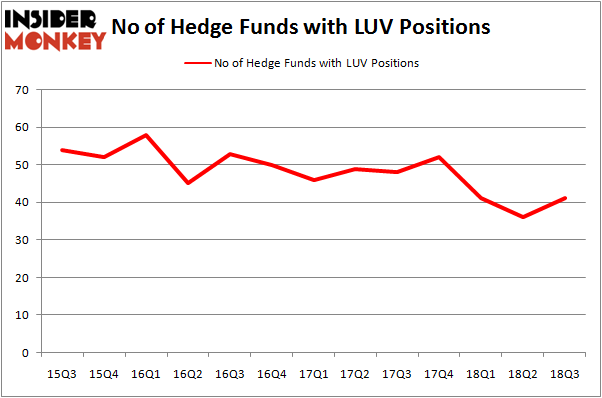 More specifically, Berkshire Hathaway was the largest shareholder of Southwest Airlines Co. (NYSE:LUV), with a stake worth $3500.2 million reported as of the end of September. Trailing Berkshire Hathaway was PAR Capital Management, which amassed a stake valued at $304 million. AQR Capital Management, Two Sigma Advisors, and Citadel Investment Group were also very fond of the stock, giving the stock large weights in their portfolios.

Consequently, key hedge funds were leading the bulls’ herd. Interval Partners, managed by Gregg Moskowitz, established the most outsized position in Southwest Airlines Co. (NYSE:LUV). Interval Partners had $18.7 million invested in the company at the end of the quarter. Andrew Feldstein and Stephen Siderow’s Blue Mountain Capital also made an $11.7 million investment in the stock during the quarter. The other funds with new positions in the stock are Israel Englander’s Millennium Management, John Tompkins’s Tyvor Capital, and Jeffrey Talpins’s Element Capital Management.

As you can see these stocks had an average of 25.25 hedge funds with bullish positions and the average amount invested in these stocks was $513 million. That figure was $5209 million in LUV’s case. Halliburton Company (NYSE:HAL) is the most popular stock in this table. On the other hand China Unicom (Hong Kong) Limited (NYSE:CHU) is the least popular one with only 6 bullish hedge fund positions. Compared to these stocks Southwest Airlines Co. (NYSE:LUV) is more popular among hedge funds. Considering that hedge funds are fond of this stock in relation to its market cap peers, it may be a good idea to analyze it in detail and potentially include it in your portfolio.