In The Intelligent Investor, Benjamin Graham defined a bargain issue as one which, on the basis of facts established by analysis, appears to be worth considerably more than it is selling for. According to Graham, an issue is not a true “bargain” unless the indicated value is at least 50% more than the price. To identify a bargain issue, Graham proposed 2 tests: the first one being the “method of appraisal” or estimating future earnings and then multiplying these by a factor (that is, how attractive is the stock from a valuation perspective). The second test is the value of the business to a private owner (how attractive is the firm’s balance sheet, specifically, its assets).

While at low points in the markets, finding a bargain is relatively easy; the current market condition makes this process challenging. Most stocks’ relative valuation (to bonds). It is normal to see prices way above the value that fundamentals dictate.

Identifying a bargain issue has become increasingly challenging, but not impossible. Despite an amazing 76% increase in stock price in the past 12 months, Southwest Airlines Co. (NYSE:LUV) could be the value pick I have been searching for a long time. 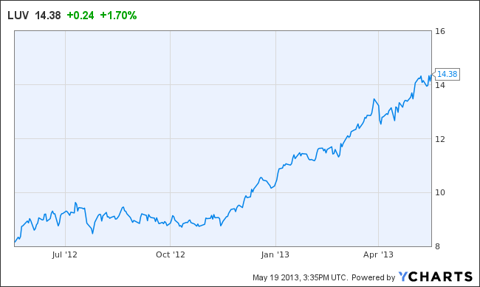 In this article, we show that even after the amazing rally it experienced in the past year, Southwest Airlines Co. (NYSE:LUV) passes the 2 tests proposed by Graham. The analysis in this article follows a value investment philosophy and a one year investment horizon, therefore we will not pay attention to technicals and short term momentum. I would not have been able to identify this pick if it weren’t for Kyle Cerminara, from Fundamental Global Investors, who recently made a buy call on Southwest at SumZero.

To past the first Graham test, we first use a multiples approach. Due to similarities in the business environment, our peer group involves: Delta Air Lines, Inc. (NYSE:DAL), United Continental Holdings Inc (NYSE:UAL) and US Airways Group, Inc. (NYSE:LCC). Southwest’s current P/E ratio stands at 28.1, Delta at 17.7, United Continental at 5.9 and US Airways at 6,1. But it gets better. Let us move to the EBITA figure for Southwest, $ 1.58 billion as of March 2013. Stock is trading at $14.38 dollars per share (which is approximately the closing price on Friday 17, 2013). This implies a current market capitalization of roughly $10.5B. Therefore, even after its recent increase in stock price, Southwest Airlines Co. (NYSE:LUV) is trading only at 6x EBITA.

We are not alone in our thoughts. Matthew Unruh recently wrote an article about the stock, were he estimated that the price range for Southwest from $12.85 to $32.91. Kyle Cerminara (who has a $32 price target), from Fundamental Global Investors, also recognizes the amazing value this airline can carry: Southwest is trading at just 4x operating cash flow. The stock is also trading at 80% of its replacement costs versus 300% in 2000, when it achieved its highest profitability and margin.

We can also observe a healthy trend in free cash flows since 2008. Notice that operating revenue is increasing since 2010 (were free cash flow achieved a record high). Despite this, cash flow has decreased since 2010. This is a signal that Southwest Airlines Co. (NYSE:LUV)’s management is increasing current operational costs in order to guarantee healthy growth in the future.

Our assumptions are as follow: we assume a 12% annual growth rate for the next 10 years and a 3% terminal growth rate. For the WACC discount rate, we assume 9%. Using these assumptions, we obtain a fair value estimate of $20.49 per share, well above the current market price. The following image is a screenshot of our spreadsheet, were you can observe other details, like taxes and margins. We also include a sensitivity matrix.

For being an airline, Southwest has a strong balance sheet. According to Yahoo Finance, it holds more than $4 billion in cash and short term investments, which is about 40% of its current market capitalization. Southwest Airlines Co. (NYSE:LUV) also enjoys low leverage, as measured by debt-to-total capital (including aircraft leases, which are off balance sheet). Kyle Cerminara estimates that debt-to-total capital continues to decline to 41% at year-end 2012, compared to 47% in 2011, and 50% after acquiring AirTran in May 2011.

But according to Basili Alukos from Morning Star, there is also a $800 million undrawn revolver. If fuel prices increase substantially in the next years, the firm could find it hard to meet its principal commitments. However, the introduction of more fuel-efficient airplanes could help to offset this exogenous risk. 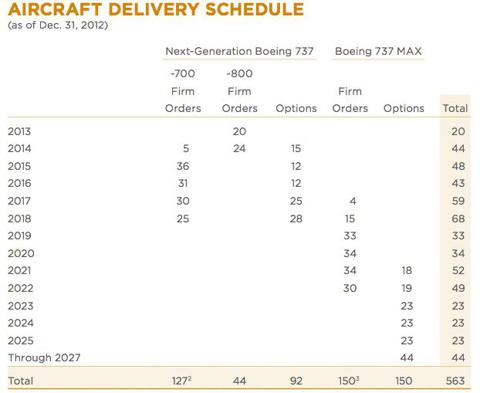 There is something special about Southwest: Profitability

Despite being an airline, Southwest has passed the 2 Graham tests and is a potential bargain issue. But there is more. Southwest has never filed bankruptcy, unlike most of its competitors. It has been profitable for the past 40 years, never gone under a major downsizing and it could also be the airline with the fewest complaints . According to this study, just 0.27 per 100,000 passengers in 2010 filled a complaint the previous year.