Is Southern Copper Corporation (SCCO) A Good Stock To Buy?

Hedge funds are known to underperform the bull markets but that’s not because they are terrible at stock picking. Hedge funds underperform because their net exposure in only 40-70% and they charge exorbitant fees. No one knows what the future holds and how market participants will react to the bountiful news that floods in each day. However, hedge funds’ consensus picks on average deliver market beating returns. For example in the first 5 months of this year through May 30th the Standard and Poor’s 500 Index returned approximately 12.1% (including dividend payments). Conversely, hedge funds’ top 20 large-cap stock picks generated a return of 18.7% during the same 5-month period, with the majority of these stock picks outperforming the broader market benchmark. Interestingly, an average long/short hedge fund returned only a fraction of this value due to the hedges they implemented and the large fees they charged. If you pay attention to the actual hedge fund returns versus the returns of their long stock picks, you might believe that it is a waste of time to analyze hedge funds’ purchases. We know better. That’s why we scrutinize hedge fund sentiment before we invest in a stock like Southern Copper Corporation (NYSE:SCCO).

Southern Copper Corporation (NYSE:SCCO) was in 13 hedge funds’ portfolios at the end of the first quarter of 2019. SCCO investors should be aware of a decrease in hedge fund sentiment in recent months. There were 15 hedge funds in our database with SCCO positions at the end of the previous quarter. Our calculations also showed that SCCO isn’t among the 30 most popular stocks among hedge funds.

In today’s marketplace there are a large number of methods stock traders put to use to assess their holdings. Some of the most innovative methods are hedge fund and insider trading sentiment. Our experts have shown that, historically, those who follow the best picks of the best investment managers can outclass the market by a superb margin (see the details here). 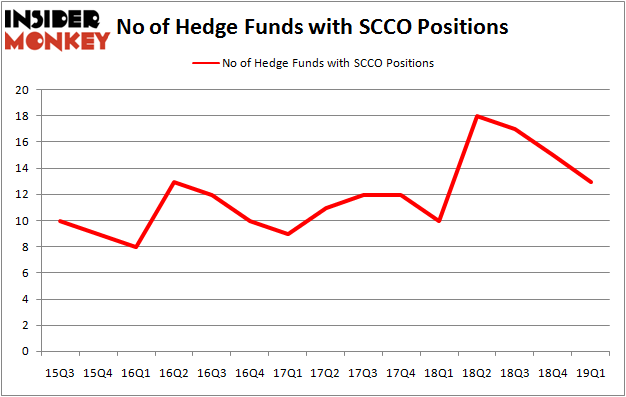 When looking at the institutional investors followed by Insider Monkey, Fisher Asset Management, managed by Ken Fisher, holds the biggest position in Southern Copper Corporation (NYSE:SCCO). Fisher Asset Management has a $141.4 million position in the stock, comprising 0.2% of its 13F portfolio. The second most bullish fund manager is Capital Growth Management, led by Ken Heebner, holding a $33.9 million position; the fund has 2.1% of its 13F portfolio invested in the stock. Some other professional money managers that are bullish consist of Cliff Asness’s AQR Capital Management, Todd J. Kantor’s Encompass Capital Advisors and Paul Marshall and Ian Wace’s Marshall Wace LLP.

Due to the fact that Southern Copper Corporation (NYSE:SCCO) has witnessed a decline in interest from hedge fund managers, it’s easy to see that there were a few funds that slashed their positions entirely last quarter. It’s worth mentioning that Jim Simons’s Renaissance Technologies cut the biggest position of the “upper crust” of funds followed by Insider Monkey, worth an estimated $22.8 million in stock, and Jacob Doft’s Highline Capital Management was right behind this move, as the fund sold off about $12 million worth. These moves are important to note, as aggregate hedge fund interest fell by 2 funds last quarter.

As you can see these stocks had an average of 39 hedge funds with bullish positions and the average amount invested in these stocks was $1573 million. That figure was $235 million in SCCO’s case. Electronic Arts Inc. (NASDAQ:EA) is the most popular stock in this table. On the other hand Telefonaktiebolaget LM Ericsson (publ) (NASDAQ:ERIC) is the least popular one with only 20 bullish hedge fund positions. Compared to these stocks Southern Copper Corporation (NYSE:SCCO) is even less popular than ERIC. Hedge funds dodged a bullet by taking a bearish stance towards SCCO. Our calculations showed that the top 20 most popular hedge fund stocks returned 6.2% in Q2 through June 19th and outperformed the S&P 500 ETF (SPY) by nearly 3 percentage points. Unfortunately SCCO wasn’t nearly as popular as these 20 stocks (hedge fund sentiment was very bearish); SCCO investors were disappointed as the stock returned -2.6% during the same time frame and underperformed the market. If you are interested in investing in large cap stocks with huge upside potential, you should check out the top 20 most popular stocks among hedge funds as 13 of these stocks already outperformed the market so far in the second quarter.