Solaris Oilfield Infrastructure, Inc. (NYSE:SOI) has seen an increase in hedge fund sentiment of late. SOI was in 16 hedge funds’ portfolios at the end of the first quarter of 2019. There were 15 hedge funds in our database with SOI positions at the end of the previous quarter. Our calculations also showed that soi isn’t among the 30 most popular stocks among hedge funds.

How have hedgies been trading Solaris Oilfield Infrastructure, Inc. (NYSE:SOI)? 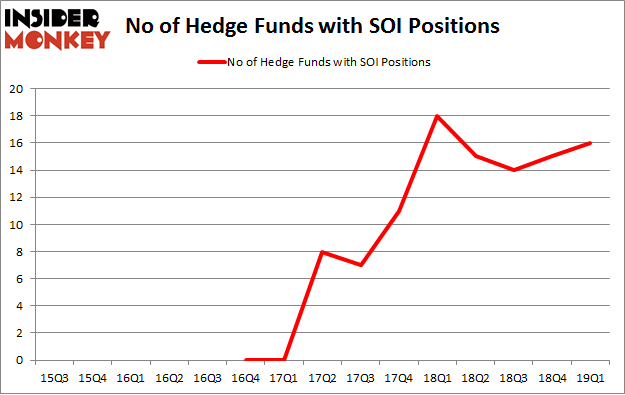 According to publicly available hedge fund and institutional investor holdings data compiled by Insider Monkey, Andrew Feldstein and Stephen Siderow’s Blue Mountain Capital has the largest position in Solaris Oilfield Infrastructure, Inc. (NYSE:SOI), worth close to $25.9 million, amounting to 0.3% of its total 13F portfolio. Sitting at the No. 2 spot is Adage Capital Management, managed by Phill Gross and Robert Atchinson, which holds a $23.6 million position; 0.1% of its 13F portfolio is allocated to the company. Some other hedge funds and institutional investors that are bullish include Todd J. Kantor’s Encompass Capital Advisors, Anand Parekh’s Alyeska Investment Group and Peter Rathjens, Bruce Clarke and John Campbell’s Arrowstreet Capital.