Is Solaredge Technologies Inc (SEDG) A Good Stock To Buy?

Solaredge Technologies Inc (NASDAQ:SEDG) has seen a decrease in support from the world’s most elite money managers in recent months. SEDG was in 14 hedge funds’ portfolios at the end of September. There were 15 hedge funds in our database with SEDG positions at the end of the previous quarter. Our calculations also showed that SEDG isn’t among the 30 most popular stocks among hedge funds.

What have hedge funds been doing with Solaredge Technologies Inc (NASDAQ:SEDG)? 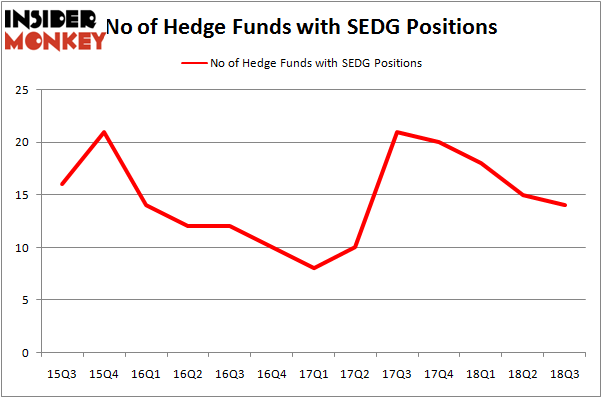 The largest stake in Solaredge Technologies Inc (NASDAQ:SEDG) was held by Renaissance Technologies, which reported holding $16.4 million worth of stock at the end of September. It was followed by Rima Senvest Management with a $12.1 million position. Other investors bullish on the company included Millennium Management, Two Sigma Advisors, and Balyasny Asset Management.

Since Solaredge Technologies Inc (NASDAQ:SEDG) has witnessed bearish sentiment from hedge fund managers, we can see that there lies a certain “tier” of fund managers that elected to cut their positions entirely last quarter. At the top of the heap, Peter Muller’s PDT Partners said goodbye to the biggest stake of the “upper crust” of funds followed by Insider Monkey, comprising about $11.6 million in stock. Paul Tudor Jones’s fund, Tudor Investment Corp, also said goodbye to its stock, about $1.6 million worth. These moves are interesting, as total hedge fund interest fell by 1 funds last quarter.

As you can see these stocks had an average of 15 hedge funds with bullish positions and the average amount invested in these stocks was $186 million. That figure was $67 million in SEDG’s case. MRC Global Inc (NYSE:MRC) is the most popular stock in this table. On the other hand Calavo Growers, Inc. (NASDAQ:CVGW) is the least popular one with only 12 bullish hedge fund positions. Solaredge Technologies Inc (NASDAQ:SEDG) is not the least popular stock in this group but hedge fund interest is still below average. This is a slightly negative signal and we’d rather spend our time researching stocks that hedge funds are piling on. In this regard MRC might be a better candidate to consider a long position.