Is Smartsheet Inc. (SMAR) A Good Stock To Buy?

Is Smartsheet Inc. (NYSE:SMAR) a buy here? Hedge funds are taking a pessimistic view at the margin. The number of bullish hedge fund positions went down by 1 recently. Our calculations also showed that SMAR isn’t among the 30 most popular stocks among hedge funds. SMAR was in 45 hedge funds’ portfolios at the end of September. There were 46 hedge funds (all time high) in our database with SMAR holdings at the end of the previous quarter.

To most investors, hedge funds are seen as unimportant, old financial tools of the past. While there are greater than 8000 funds trading today, Our experts choose to focus on the upper echelon of this group, approximately 750 funds. It is estimated that this group of investors oversee most of the hedge fund industry’s total asset base, and by shadowing their highest performing stock picks, Insider Monkey has figured out many investment strategies that have historically surpassed the broader indices. Insider Monkey’s flagship short hedge fund strategy beat the S&P 500 short ETFs by around 20 percentage points per annum since its inception in May 2014. Our portfolio of short stocks lost 27.8% since February 2017 (through November 21st) even though the market was up more than 39% during the same period. We just shared a list of 7 short targets in our latest quarterly update .

Unlike the largest US hedge funds that are convinced Dow will soar past 40,000 or the world’s most bearish hedge fund that’s more convinced than ever that a crash is coming, our long-short investment strategy doesn’t rely on bull or bear markets to deliver double digit returns. We only rely on the best performing hedge funds‘ buy/sell signals. Let’s review the fresh hedge fund action surrounding Smartsheet Inc. (NYSE:SMAR). 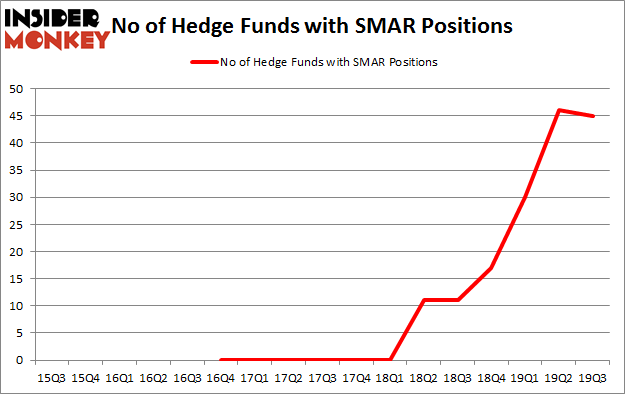 Since Smartsheet Inc. (NYSE:SMAR) has witnessed bearish sentiment from the smart money, we can see that there was a specific group of hedge funds that decided to sell off their full holdings by the end of the third quarter. It’s worth mentioning that Glen Kacher’s Light Street Capital dropped the largest position of all the hedgies monitored by Insider Monkey, totaling about $53.1 million in stock, and Brian Ashford-Russell and Tim Woolley’s Polar Capital was right behind this move, as the fund said goodbye to about $37.9 million worth. These transactions are important to note, as aggregate hedge fund interest fell by 1 funds by the end of the third quarter.

Let’s check out hedge fund activity in other stocks – not necessarily in the same industry as Smartsheet Inc. (NYSE:SMAR) but similarly valued. We will take a look at Equity Commonwealth (NYSE:EQC), Copa Holdings, S.A. (NYSE:CPA), RLI Corp. (NYSE:RLI), and PNM Resources, Inc. (NYSE:PNM). This group of stocks’ market caps are similar to SMAR’s market cap.

As you can see these stocks had an average of 17.5 hedge funds with bullish positions and the average amount invested in these stocks was $265 million. That figure was $1214 million in SMAR’s case. Equity Commonwealth (NYSE:EQC) is the most popular stock in this table. On the other hand RLI Corp. (NYSE:RLI) is the least popular one with only 14 bullish hedge fund positions. Compared to these stocks Smartsheet Inc. (NYSE:SMAR) is way more popular among hedge funds. Our calculations showed that top 20 most popular stocks among hedge funds returned 34.7% in 2019 through November 22nd and outperformed the S&P 500 ETF (SPY) by 8.5 percentage points. Hedge funds were also right about betting on SMAR as the stock returned 24.2% during Q4 (through 11/22) and outperformed the market by an even larger margin. Hedge funds were clearly right about piling into this stock relative to other stocks with similar market capitalizations.