Simpson Manufacturing Co, Inc. (NYSE:SSD) investors should pay attention to an increase in hedge fund interest lately. Our calculations also showed that ssd isn’t among the 30 most popular stocks among hedge funds.

At Q3’s end, a total of 17 of the hedge funds tracked by Insider Monkey were bullish on this stock, a change of 13% from one quarter earlier. By comparison, 17 hedge funds held shares or bullish call options in SSD heading into this year. With hedgies’ positions undergoing their usual ebb and flow, there exists a few noteworthy hedge fund managers who were boosting their stakes considerably (or already accumulated large positions). 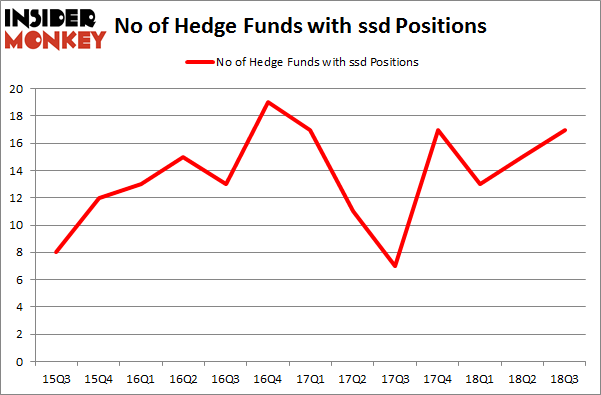 According to Insider Monkey’s hedge fund database, Ariel Investments, managed by John W. Rogers, holds the number one position in Simpson Manufacturing Co, Inc. (NYSE:SSD). Ariel Investments has a $128.6 million position in the stock, comprising 1.4% of its 13F portfolio. The second most bullish fund manager is Chuck Royce of Royce & Associates, with a $46.1 million position; the fund has 0.3% of its 13F portfolio invested in the stock. Some other members of the smart money with similar optimism encompass Israel Englander’s Millennium Management, Ed Bosek’s BeaconLight Capital and Jim Simons’s Renaissance Technologies.

As you can see these stocks had an average of 20 hedge funds with bullish positions and the average amount invested in these stocks was $331 million. That figure was $236 million in SSD’s case. Cornerstone OnDemand, Inc. (NASDAQ:CSOD) is the most popular stock in this table. On the other hand SYNNEX Corporation (NYSE:SNX) is the least popular one with only 17 bullish hedge fund positions. Compared to these stocks Simpson Manufacturing Co, Inc. (NYSE:SSD) is even less popular than SNX. Considering that hedge funds aren’t fond of this stock in relation to other companies analyzed in this article, it may be a good idea to analyze it in detail and understand why the smart money isn’t behind this stock. This isn’t necessarily bad news. Although it is possible that hedge funds may think the stock is overpriced and view the stock as a short candidate, they may not be very familiar with the bullish thesis. In either case more research is warranted.