Is Sientra Inc (SIEN) A Good Stock To Buy?

Is Sientra Inc (NASDAQ:SIEN) going to take off soon? Money managers are in a pessimistic mood. The number of bullish hedge fund bets were trimmed by 8 lately. Our calculations also showed that sien isn’t among the 30 most popular stocks among hedge funds. SIEN was in 11 hedge funds’ portfolios at the end of September. There were 19 hedge funds in our database with SIEN positions at the end of the previous quarter.

What have hedge funds been doing with Sientra Inc (NASDAQ:SIEN)?

Heading into the fourth quarter of 2018, a total of 11 of the hedge funds tracked by Insider Monkey were long this stock, a change of -42% from the previous quarter. On the other hand, there were a total of 10 hedge funds with a bullish position in SIEN at the beginning of this year. With hedgies’ sentiment swirling, there exists an “upper tier” of notable hedge fund managers who were adding to their stakes meaningfully (or already accumulated large positions). 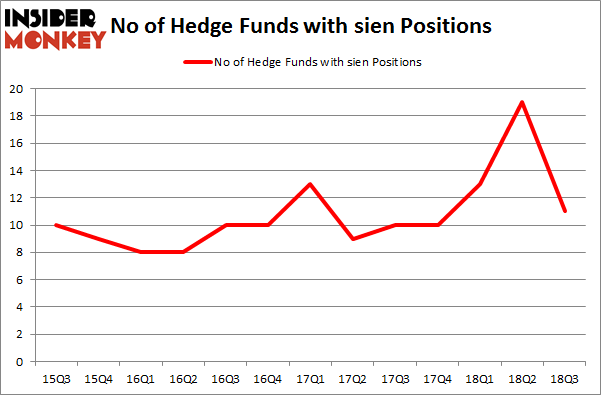 Among these funds, Driehaus Capital held the most valuable stake in Sientra Inc (NASDAQ:SIEN), which was worth $27.5 million at the end of the third quarter. On the second spot was Polar Capital which amassed $23.9 million worth of shares. Moreover, Deerfield Management, Millennium Management, and Columbus Circle Investors were also bullish on Sientra Inc (NASDAQ:SIEN), allocating a large percentage of their portfolios to this stock.

Since Sientra Inc (NASDAQ:SIEN) has faced falling interest from hedge fund managers, logic holds that there lies a certain “tier” of hedge funds who were dropping their full holdings heading into Q3. Interestingly, Efrem Kamen’s Pura Vida Investments cut the biggest position of the 700 funds watched by Insider Monkey, worth about $3.6 million in stock. J. Carlo Cannell’s fund, Cannell Capital, also cut its stock, about $2.6 million worth. These bearish behaviors are interesting, as total hedge fund interest dropped by 8 funds heading into Q3.

As you can see these stocks had an average of 10.5 hedge funds with bullish positions and the average amount invested in these stocks was $68 million. That figure was $99 million in SIEN’s case. Teekay Corporation (NYSE:TK) is the most popular stock in this table. On the other hand Camden National Corporation (NASDAQ:CAC) is the least popular one with only 6 bullish hedge fund positions. Sientra Inc (NASDAQ:SIEN) is not the most popular stock in this group but hedge fund interest is still above average. This is a slightly positive signal but we’d rather spend our time researching stocks that hedge funds are piling on. In this regard TK might be a better candidate to consider a long position.