During the first half of the fourth quarter the Russell 2000 ETF (IWM) lagged the larger S&P 500 ETF (SPY) by about 4 percentage points as investors worried over the possible ramifications of rising interest rates. The hedge funds and institutional investors we track typically invest more in smaller-cap stocks than an average investor (i.e. only 298 S&P 500 constituents were among the 500 most popular stocks among hedge funds), and we have seen data that shows those funds paring back their overall exposure. Those funds cutting positions in small-caps is one reason why volatility has increased. In the following paragraphs, we take a closer look at what hedge funds and prominent investors think of Seritage Growth Properties (NYSE:SRG) and see how the stock is affected by the recent hedge fund activity.

Seritage Growth Properties (NYSE:SRG) investors should be aware of a decrease in enthusiasm from smart money of late. Our calculations also showed that SRG isn’t among the 30 most popular stocks among hedge funds.

At the end of the third quarter, a total of 14 of the hedge funds tracked by Insider Monkey held long positions in this stock, a change of -13% from the previous quarter. Below, you can check out the change in hedge fund sentiment towards SRG over the last 13 quarters. So, let’s find out which hedge funds were among the top holders of the stock and which hedge funds were making big moves. 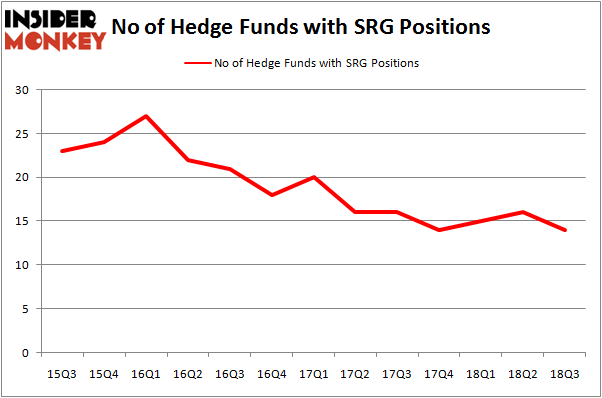 According to publicly available hedge fund and institutional investor holdings data compiled by Insider Monkey, BloombergSen, managed by Jonathan Bloomberg, holds the largest position in Seritage Growth Properties (NYSE:SRG). BloombergSen has a $118.4 million position in the stock, comprising 6.5% of its 13F portfolio. Coming in second is Empyrean Capital Partners, managed by Michael A. Price and Amos Meron, which holds a $89.9 million position; the fund has 2.8% of its 13F portfolio invested in the stock. Some other members of the smart money with similar optimism comprise Edmond M. Safra’s EMS Capital, Isaac Corre’s Governors Lane and Jeffrey Gates’s Gates Capital Management.

Due to the fact that Seritage Growth Properties (NYSE:SRG) has faced a decline in interest from the entirety of the hedge funds we track, it’s safe to say that there exists a select few hedgies who sold off their positions entirely in the third quarter. Interestingly, Kelly Hampaul’s Everett Capital Advisors sold off the biggest investment of the 700 funds tracked by Insider Monkey, worth close to $14.4 million in call options. Kelly Hampaul’s fund, Everett Capital Advisors, also cut its call options, about $2.7 million worth. These bearish behaviors are intriguing to say the least, as total hedge fund interest fell by 2 funds in the third quarter.

As you can see these stocks had an average of 19.5 hedge funds with bullish positions and the average amount invested in these stocks was $264 million. That figure was $413 million in SRG’s case. Acceleron Pharma Inc (NASDAQ:XLRN) is the most popular stock in this table. On the other hand Xenia Hotels & Resorts Inc (NYSE:XHR) is the least popular one with only 9 bullish hedge fund positions. Seritage Growth Properties (NYSE:SRG) is not the least popular stock in this group but hedge fund interest is still below average. This is a slightly negative signal and we’d rather spend our time researching stocks that hedge funds are piling on. In this regard XLRN might be a better candidate to consider a long position.