Is Select Income REIT (NYSE:SIR) worth your attention right now? The best stock pickers are getting more bullish. The number of long hedge fund positions increased by 5 lately. Our calculations also showed that sir isn’t among the 30 most popular stocks among hedge funds.

Heading into the fourth quarter of 2018, a total of 17 of the hedge funds tracked by Insider Monkey held long positions in this stock, a change of 42% from the previous quarter. The graph below displays the number of hedge funds with bullish position in SIR over the last 13 quarters. So, let’s check out which hedge funds were among the top holders of the stock and which hedge funds were making big moves. 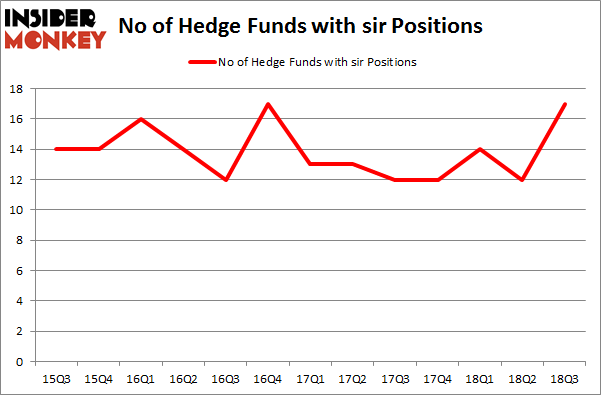 Among these funds, Manikay Partners held the most valuable stake in Select Income REIT (NYSE:SIR), which was worth $24.2 million at the end of the third quarter. On the second spot was Millennium Management which amassed $13 million worth of shares. Moreover, Magnetar Capital, Highland Capital Management, and AQR Capital Management were also bullish on Select Income REIT (NYSE:SIR), allocating a large percentage of their portfolios to this stock.

As one would reasonably expect, specific money managers were breaking ground themselves. Manikay Partners, managed by Shane Finemore, initiated the largest position in Select Income REIT (NYSE:SIR). Manikay Partners had $24.2 million invested in the company at the end of the quarter. Alec Litowitz and Ross Laser’s Magnetar Capital also made a $11.2 million investment in the stock during the quarter. The other funds with new positions in the stock are James Dondero’s Highland Capital Management, Jeffrey Pierce’s Snow Park Capital Partners, and Dmitry Balyasny’s Balyasny Asset Management.

As you can see these stocks had an average of 16 hedge funds with bullish positions and the average amount invested in these stocks was $152 million. That figure was $64 million in SIR’s case. American Axle & Manufacturing Holdings, Inc. (NYSE:AXL) is the most popular stock in this table. On the other hand Stepan Company (NYSE:SCL) is the least popular one with only 10 bullish hedge fund positions. Select Income REIT (NASDAQ:SIR) is not the most popular stock in this group but hedge fund interest is still above average. This is a slightly positive signal but we’d rather spend our time researching stocks that hedge funds are piling on. In this regard AXL might be a better candidate to consider a long position.