Insider Monkey has processed numerous 13F filings of hedge funds and successful value investors to create an extensive database of hedge fund holdings. The 13F filings show the hedge funds’ and successful investors’ positions as of the end of the first quarter. You can find articles about an individual hedge fund’s trades on numerous financial news websites. However, in this article we will take a look at their collective moves over the last 4.5 years and analyze what the smart money thinks of Seanergy Maritime Holdings Corp. (NASDAQ:SHIP) based on that data.

Seanergy Maritime Holdings Corp. (NASDAQ:SHIP) was in 3 hedge funds’ portfolios at the end of March. SHIP has seen an increase in hedge fund sentiment of late. There were 2 hedge funds in our database with SHIP positions at the end of the previous quarter. Our calculations also showed that SHIP isn’t among the 30 most popular stocks among hedge funds (click for Q1 rankings and see the video for a quick look at the top 5 stocks).

At Insider Monkey we leave no stone unturned when looking for the next great investment idea. For example, legendary investor Bill Miller told investors to sell 7 extremely popular recession stocks last month. So, we went through his list and recommended another stock with 100% upside potential instead. We interview hedge fund managers and ask them about their best ideas. If you want to find out the best healthcare stock to buy right now, you can watch our latest hedge fund manager interview here. We read hedge fund investor letters and listen to stock pitches at hedge fund conferences. Our best call in 2020 was shorting the market when S&P 500 was trading at 3150 after realizing the coronavirus pandemic’s significance before most investors. Now we’re going to take a gander at the new hedge fund action encompassing Seanergy Maritime Holdings Corp. (NASDAQ:SHIP). 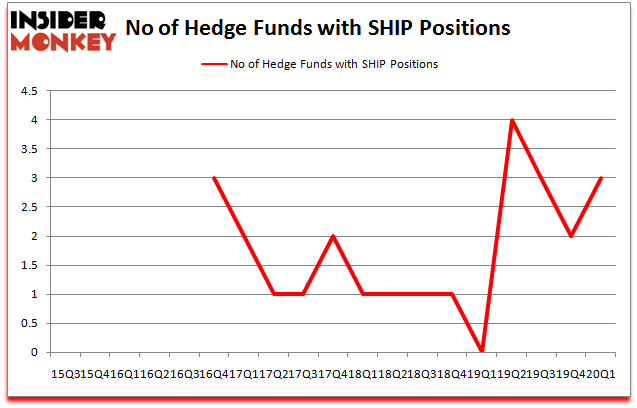 The largest stake in Seanergy Maritime Holdings Corp. (NASDAQ:SHIP) was held by Sabby Capital, which reported holding $0 million worth of stock at the end of September. It was followed by Renaissance Technologies with a $0 million position. The only other hedge fund that is bullish on the company was Millennium Management.

With a general bullishness amongst the heavyweights, specific money managers have jumped into Seanergy Maritime Holdings Corp. (NASDAQ:SHIP) headfirst. Millennium Management, managed by Israel Englander, assembled the most outsized position in Seanergy Maritime Holdings Corp. (NASDAQ:SHIP). Millennium Management had $0 million invested in the company at the end of the quarter.

As you can see these stocks had an average of 2.5 hedge funds with bullish positions and the average amount invested in these stocks was $2 million. That figure was $0 million in SHIP’s case. SAExploration Holdings, Inc. (NASDAQ:SAEX) is the most popular stock in this table. On the other hand NTN Buzztime Inc (NYSE:NTN) is the least popular one with only 1 bullish hedge fund positions. Seanergy Maritime Holdings Corp. (NASDAQ:SHIP) is not the most popular stock in this group but hedge fund interest is still above average. This is a slightly positive signal but we’d rather spend our time researching stocks that hedge funds are piling on. Our calculations showed that top 10 most popular stocks among hedge funds returned 41.4% in 2019 and outperformed the S&P 500 ETF (SPY) by 10.1 percentage points. These stocks gained 7.9% in 2020 through May 22nd but beat the market by 15.6 percentage points. Unfortunately SHIP wasn’t nearly as popular as these 10 stocks and hedge funds that were betting on SHIP were disappointed as the stock returned -6.7% during the same time period and underperformed the market. If you are interested in investing in large cap stocks with huge upside potential, you should check out the top 10 most popular stocks among hedge funds as many of these stocks already outperformed the market so far this year.

How Hedge Funds Traded Soligenix, Inc. (SNGX) During The Crash

Hedge Funds Are Cashing Out Of RigNet Inc (RNET)
Monthly Newsletter Strategy
Download a free copy of our newsletter and see the details inside!
Hedge Fund Resource Center
Related News
Is Seanergy Maritime Holdings Corp. (SHIP) A Good Stock To Buy? Shipping Into Some Profits: Why Shippers Took Off Valeant, BP, Euroseas, and More: Here’s Why These Stocks Are Trending Today 10 States That Give the Most Money to the Federal Government 13 Largest Cobalt Producing Countries in the World 8 States That Allow Euthanasia
Billionaire Hedge Funds