Hedge fund managers like David Einhorn, Dan Loeb, or Carl Icahn became billionaires through reaping large profits for their investors, which is why piggybacking their stock picks may provide us with significant returns as well. Many hedge funds, like Paul Singer’s Elliott Management, are pretty secretive, but we can still get some insights by analyzing their quarterly 13F filings. One of the most fertile grounds for large abnormal returns is hedge funds’ most popular small-cap picks, which are not so widely followed and often trade at a discount to their intrinsic value. In this article we will check out hedge fund activity in another small-cap stock: SEACOR Marine Holdings Inc. (NYSE:SMHI).

SEACOR Marine Holdings Inc. (NYSE:SMHI) was in 6 hedge funds’ portfolios at the end of the third quarter of 2018. SMHI shareholders have witnessed a decrease in hedge fund sentiment in recent months. There were 7 hedge funds in our database with SMHI positions at the end of the previous quarter. Our calculations also showed that SMHI isn’t among the 30 most popular stocks among hedge funds.

If you’d ask most traders, hedge funds are assumed to be worthless, old investment vehicles of years past. While there are greater than 8,000 funds in operation at the moment, We hone in on the crème de la crème of this group, approximately 700 funds. Most estimates calculate that this group of people administer bulk of all hedge funds’ total capital, and by observing their finest picks, Insider Monkey has found a few investment strategies that have historically outstripped the S&P 500 index. Insider Monkey’s flagship hedge fund strategy outrun the S&P 500 index by 6 percentage points a year since its inception in May 2014 through early November 2018. We were able to generate large returns even by identifying short candidates. Our portfolio of short stocks lost 24% since February 2017 (through December 3rd) even though the market was up nearly 23% during the same period. We just shared a list of 11 short targets in our latest quarterly update. 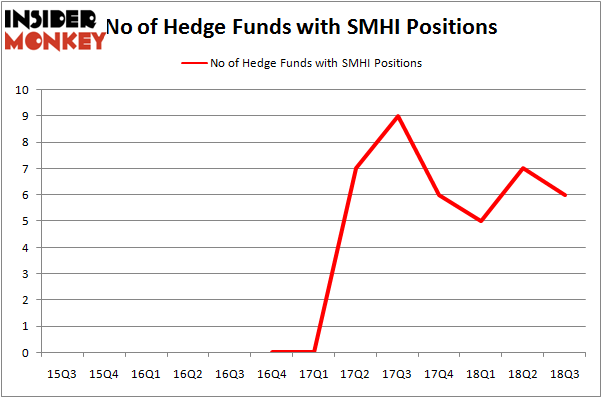 Among these funds, Royce & Associates held the most valuable stake in SEACOR Marine Holdings Inc. (NYSE:SMHI), which was worth $37 million at the end of the third quarter. On the second spot was Third Avenue Management which amassed $8.1 million worth of shares. Moreover, D E Shaw, Cove Street Capital, and HighVista Strategies were also bullish on SEACOR Marine Holdings Inc. (NYSE:SMHI), allocating a large percentage of their portfolios to this stock.

Due to the fact that SEACOR Marine Holdings Inc. (NYSE:SMHI) has witnessed bearish sentiment from hedge fund managers, logic holds that there lies a certain “tier” of hedge funds that decided to sell off their full holdings by the end of the third quarter. At the top of the heap, Israel Englander’s Millennium Management dumped the largest stake of all the hedgies tracked by Insider Monkey, worth close to $0.8 million in stock, and Ken Griffin’s Citadel Investment Group was right behind this move, as the fund dropped about $0.2 million worth. These bearish behaviors are interesting, as aggregate hedge fund interest fell by 1 funds by the end of the third quarter.

Let’s go over hedge fund activity in other stocks – not necessarily in the same industry as SEACOR Marine Holdings Inc. (NYSE:SMHI) but similarly valued. We will take a look at Forty Seven, Inc. (NASDAQ:FTSV), Limoneira Company (NASDAQ:LMNR), TG Therapeutics Inc (NASDAQ:TGTX), and Merus N.V. (NASDAQ:MRUS). All of these stocks’ market caps are closest to SMHI’s market cap.

As you can see these stocks had an average of 9.5 hedge funds with bullish positions and the average amount invested in these stocks was $65 million. That figure was $50 million in SMHI’s case. TG Therapeutics Inc (NASDAQ:TGTX) is the most popular stock in this table. On the other hand Limoneira Company (NASDAQ:LMNR) is the least popular one with only 6 bullish hedge fund positions. Compared to these stocks SEACOR Marine Holdings Inc. (NYSE:SMHI) is even less popular than LMNR. Considering that hedge funds aren’t fond of this stock in relation to other companies analyzed in this article, it may be a good idea to analyze it in detail and understand why the smart money isn’t behind this stock. This isn’t necessarily bad news. Although it is possible that hedge funds may think the stock is overpriced and view the stock as a short candidate, they may not be very familiar with the bullish thesis. In either case more research is warranted.