Is Sanmina Corporation (SANM) A Good Stock To Buy?

Hedge fund managers like David Einhorn, Dan Loeb, or Carl Icahn became billionaires through reaping large profits for their investors, which is why piggybacking their stock picks may provide us with significant returns as well. Many hedge funds, like Paul Singer’s Elliott Management, are pretty secretive, but we can still get some insights by analyzing their quarterly 13F filings. One of the most fertile grounds for large abnormal returns is hedge funds’ most popular small-cap picks, which are not so widely followed and often trade at a discount to their intrinsic value. In this article we will check out hedge fund activity in another small-cap stock: Sanmina Corporation (NASDAQ:SANM).

Sanmina Corporation (NASDAQ:SANM) was in 13 hedge funds’ portfolios at the end of the third quarter of 2018. SANM shareholders have witnessed a decrease in hedge fund interest recently. There were 15 hedge funds in our database with SANM positions at the end of the previous quarter. Our calculations also showed that SANM isn’t among the 30 most popular stocks among hedge funds.

What does the smart money think about Sanmina Corporation (NASDAQ:SANM)? 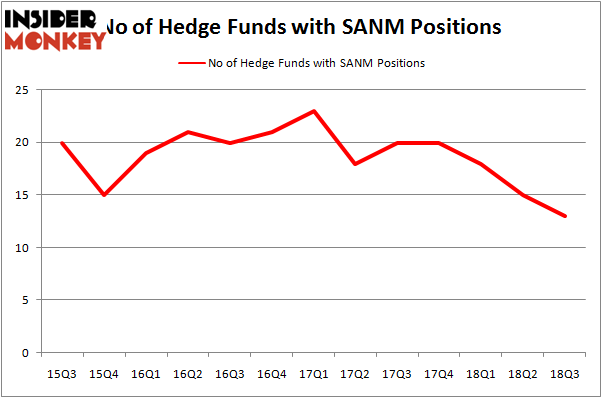 More specifically, Diamond Hill Capital was the largest shareholder of Sanmina Corporation (NASDAQ:SANM), with a stake worth $78 million reported as of the end of September. Trailing Diamond Hill Capital was Royce & Associates, which amassed a stake valued at $24.6 million. D E Shaw, Renaissance Technologies, and Millennium Management were also very fond of the stock, giving the stock large weights in their portfolios.

Due to the fact that Sanmina Corporation (NASDAQ:SANM) has experienced a decline in interest from hedge fund managers, we can see that there were a few hedge funds that slashed their positions entirely in the third quarter. It’s worth mentioning that Anand Parekh’s Alyeska Investment Group sold off the biggest stake of all the hedgies watched by Insider Monkey, worth close to $31.5 million in stock, and Glenn Russell Dubin’s Highbridge Capital Management was right behind this move, as the fund dropped about $3.8 million worth. These transactions are important to note, as total hedge fund interest dropped by 2 funds in the third quarter.

As you can see these stocks had an average of 11.5 hedge funds with bullish positions and the average amount invested in these stocks was $222 million. That figure was $145 million in SANM’s case. Camping World Holdings, Inc. (NYSE:CWH) is the most popular stock in this table. On the other hand FBL Financial Group, Inc. (NYSE:FFG) is the least popular one with only 4 bullish hedge fund positions. Sanmina Corporation (NASDAQ:SANM) is not the most popular stock in this group but hedge fund interest is still above average. This is a slightly positive signal but we’d rather spend our time researching stocks that hedge funds are piling on. In this regard CWH might be a better candidate to consider a long position.

Hedge Funds Are Crazy About Steven Madden, Ltd. (SHOO)
Monthly Newsletter Strategy
Download a free copy of our newsletter and see the details inside!
Hedge Fund Resource Center
Related News
Do Hedge Funds Love Sanmina Corp (SANM)? The Chief Executive Officers of These Four Companies Buy Shares, Plus Insider Selling at Sanmina Corp (SANM) Sanmina, Invivo, Knowles, NXP Semiconductors and The Container Store Are Top Gainers Today: Here’s Why Here’s What Has Investors Excited About These Four Stocks Today Advanced Energy Industries, Inc. (AEIS): Hedge Funds Are Bullish and Insiders Are Undecided, What Should You Do? This Metric Says You Are Smart to Buy AVX Corporation (AVX) Here is What Hedge Funds Think About Sanmina Corp (SANM) 10 Best Vacation Spots for Singles in Their 40’s 15 Highest Paid YouTubers of 2018 16 Good Excuses to Miss Work for a Few Days
Billionaire Hedge Funds