You probably know from experience that there is not as much information on small-cap companies as there is on large companies. Of course, this makes it really hard and difficult for individual investors to make a proper and accurate analysis of certain small-cap companies. However, well-known and successful hedge fund investors like Carl Icahn and George Soros hold the necessary resources and abilities to conduct an extensive stock analysis on small-cap stocks, which enable them to make millions of dollars by identifying potential winners within the small-cap galaxy of stocks. This represents the main reason why Insider Monkey takes notice of the hedge fund activity in these overlooked stocks.

Sanderson Farms, Inc. (NASDAQ:SAFM) shares haven’t seen a lot of action during the third quarter. Overall, hedge fund sentiment was unchanged. The stock was in 15 hedge funds’ portfolios at the end of the third quarter of 2018. At the end of this article, we will also compare SAFM to other stocks including Yamana Gold Inc. (USA) (NYSE:AUY), Anixter International Inc. (NYSE:AXE), and Chromcraft Revington, Inc. (NYSEAMEX:CRC) to get a better sense of its popularity.

In the financial world, there are many tools stock market investors put to use to evaluate stocks. A duo of the less utilized tools is hedge fund and insider trading sentiment. We have shown that, historically, those who follow the best picks of the elite investment managers can outpace the S&P 500 by a very impressive margin (see the details here).

While collecting data on the company, we found Wolf Hill Capital, LLC ‘s Quarterly Letter to its shareholders. In the fourth quarter, the fund purchased a short position in Sanderson Farms, and offered its opinion on the company in its report:

“During the quarter we established a sizeable short position in Sanderson Farms, the third largest domestic poultry processor with approximately an 8% U.S. market share. We believe that SAFM and other domestic chicken processors are currently over-earning based on unsustainably high processing margins that are poised to mean-revert over the course of the next two years as industry capacity ramps up. We believe that fair value for SAFM is about $72/share, based on 12x mid-cycle earnings of $6.00/share, or 56% lower than the price at which we initiated our position.

Chicken production is a highly volatile, low-margin, commodity business with virtually no barriers to entry. The profitability of a chicken producer is primarily a function of two variables: the price of fresh, frozen, and processed chicken products, and the spread between feed costs (corn and soy) which account for 45% of total costs. Over the course of the past few years, SAFM has benefited from a perfect storm type scenario of elevated chicken prices due to a temporary curtailment in supply, and low feed costs. Over the past 6 years, SAFM has averaged $8.17/share in EPS, versus $12.30 in 2017. 2017’s record earnings were driven by gross margins/pound of $.16 versus a 15- year average gross margin/pound of $.09. As is often the case in highly cyclical industries, when industry conditions tighten considerably, producers add capacity to take advantage of this favorable, often fleeting dynamic. New capacity takes time to ramp up and often comes online just as industry conditions are beginning to roll over. Protein Industry analysts are currently forecasting supply growth of over 4% per year over the course of the next several years based on already announced capacity additions as many previously announced expansion projects come on-line. We anticipate this supply growth to continue to put downward pressure on chicken prices. Even if feed costs do not continue their recent upward trajectory, SAFM’s 2018 earnings will likely fall substantially below current consensus earnings estimates.”

Our readers will be interested to know that Joe F. Sanderson Jr., Chairman of the Board of Directors and Chief Executive Officer of Sanderson Farms, Inc., was responsible for the last major insider purchase of the company’s stock. He purchased 1,200 shares at $53.74. With the shares presently trading at $105.44, it was certainly a lucrative purchase for the executive.

At the end of the third quarter, a total of 15 of the hedge funds tracked by Insider Monkey were bullish on this stock, a change of 0% from the second quarter of 2018. By comparison, 22 hedge funds held shares or bullish call options in SAFM heading into this year. Our calculations also showed that SAFM isn’t among the 30 most popular stocks among hedge funds. So, let’s review which hedge funds were among the top holders of the stock and which hedge funds were making big moves. 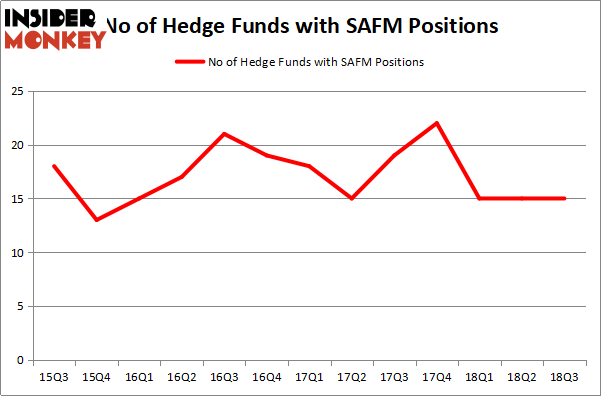 The largest stake in Sanderson Farms, Inc. (NASDAQ:SAFM) was held by Renaissance Technologies, which reported holding $184.8 million worth of stock at the end of September. It was followed by AQR Capital Management with a $60.7 million position. Other investors bullish on the company included Citadel Investment Group, Water Street Capital, and Royce & Associates.

Seeing as Sanderson Farms, Inc. (NASDAQ:SAFM) has witnessed falling interest from the aggregate hedge fund industry, it’s safe to say that there is a sect of funds that elected to cut their full holdings last quarter. It’s worth mentioning that Steve Cohen’s Point72 Asset Management said goodbye to the largest investment of all the hedgies tracked by Insider Monkey, totaling close to $5 million in stock. Dmitry Balyasny’s fund, Balyasny Asset Management, also dropped its stock, about $4.4 million worth. These transactions are intriguing to say the least, as total hedge fund interest stayed the same (this is a bearish signal in our experience).

As you can see these stocks had an average of 19.5 hedge funds with bullish positions and the average amount invested in these stocks was $252 million. That figure was $384 million in SAFM’s case. Chromcraft Revington, Inc. (NYSEAMEX:CRC) is the most popular stock in this table. On the other hand Anixter International Inc. (NYSE:AXE) is the least popular one with only 17 bullish hedge fund positions. Compared to these stocks Sanderson Farms, Inc. (NASDAQ:SAFM) is even less popular than AXE. Considering that hedge funds aren’t fond of this stock in relation to other companies analyzed in this article, it may be a good idea to analyze it in detail and understand why the smart money isn’t behind this stock. This isn’t necessarily bad news. Although it is possible that hedge funds may think the stock is overpriced and view the stock as a short candidate, they may not be very familiar with the bullish thesis. In either case, more research is warranted.