Is RY A Good Stock To Buy Now?

In this article we will take a look at whether hedge funds think Royal Bank of Canada (NYSE:RY) is a good investment right now. We check hedge fund and billionaire investor sentiment before delving into hours of research. Hedge funds spend millions of dollars on Ivy League graduates, unconventional data sources, expert networks, and get tips from investment bankers and industry insiders. Sure they sometimes fail miserably, but their consensus stock picks historically outperformed the market after adjusting for known risk factors.

Is RY a good stock to buy now? Royal Bank of Canada (NYSE:RY) shares haven’t seen a lot of action during the second quarter. Overall, hedge fund sentiment was unchanged. The stock was in 16 hedge funds’ portfolios at the end of September. Our calculations also showed that RY isn’t among the 30 most popular stocks among hedge funds (click for Q3 rankings and see the video for a quick look at the top 5 stocks). At the end of this article we will also compare RY to other stocks including Wells Fargo & Company (NYSE:WFC), Advanced Micro Devices, Inc. (NASDAQ:AMD), and GlaxoSmithKline plc (NYSE:GSK) to get a better sense of its popularity.

At Insider Monkey we scour multiple sources to uncover the next great investment idea. For example, Federal Reserve has been creating trillions of dollars electronically to keep the interest rates near zero. We believe this will lead to inflation and boost real estate prices. So, we recommended this real estate stock to our monthly premium newsletter subscribers. We go through lists like the 15 best blue chip stocks to pick the best large-cap stocks to buy. Even though we recommend positions in only a tiny fraction of the companies we analyze, we check out as many stocks as we can. We read hedge fund investor letters and listen to stock pitches at hedge fund conferences. You can subscribe to our free daily newsletter on our website. Keeping this in mind let’s go over the key hedge fund action surrounding Royal Bank of Canada (NYSE:RY).

Do Hedge Funds Think RY Is A Good Stock To Buy Now?

At third quarter’s end, a total of 16 of the hedge funds tracked by Insider Monkey were bullish on this stock, a change of 0% from the previous quarter. Below, you can check out the change in hedge fund sentiment towards RY over the last 21 quarters. So, let’s examine which hedge funds were among the top holders of the stock and which hedge funds were making big moves. 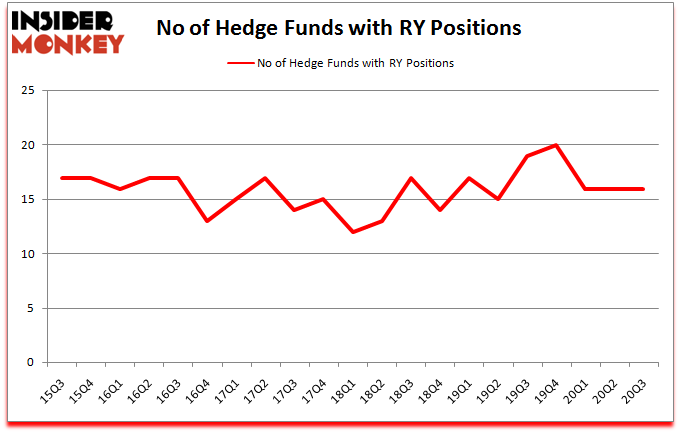 The largest stake in Royal Bank of Canada (NYSE:RY) was held by Marshall Wace LLP, which reported holding $54.5 million worth of stock at the end of September. It was followed by Citadel Investment Group with a $38.2 million position. Other investors bullish on the company included Two Sigma Advisors, GLG Partners, and Renaissance Technologies. In terms of the portfolio weights assigned to each position Heathbridge Capital Management allocated the biggest weight to Royal Bank of Canada (NYSE:RY), around 3.47% of its 13F portfolio. Marshall Wace LLP is also relatively very bullish on the stock, setting aside 0.35 percent of its 13F equity portfolio to RY.

Due to the fact that Royal Bank of Canada (NYSE:RY) has experienced bearish sentiment from the entirety of the hedge funds we track, it’s easy to see that there was a specific group of fund managers who sold off their entire stakes by the end of the third quarter. Intriguingly, Peter Muller’s PDT Partners dropped the largest position of the 750 funds watched by Insider Monkey, totaling about $0.3 million in stock, and Joel Greenblatt’s Gotham Asset Management was right behind this move, as the fund dropped about $0.3 million worth. These transactions are important to note, as aggregate hedge fund interest stayed the same (this is a bearish signal in our experience).

As you can see these stocks had an average of 57 hedge funds with bullish positions and the average amount invested in these stocks was $3528 million. That figure was $158 million in RY’s case. Wells Fargo & Company (NYSE:WFC) is the most popular stock in this table. On the other hand Sony Corporation (NYSE:SNE) is the least popular one with only 26 bullish hedge fund positions. Compared to these stocks Royal Bank of Canada (NYSE:RY) is even less popular than SNE. Our overall hedge fund sentiment score for RY is 29. Stocks with higher number of hedge fund positions relative to other stocks as well as relative to their historical range receive a higher sentiment score. Hedge funds clearly dropped the ball on RY as the stock delivered strong returns, though hedge funds’ consensus picks still generated respectable returns. Our calculations showed that top 20 most popular stocks among hedge funds returned 41.3% in 2019 and outperformed the S&P 500 ETF (SPY) by 10 percentage points. These stocks gained 30.7% in 2020 through December 14th and still beat the market by 15.8 percentage points. A small number of hedge funds were also right about betting on RY as the stock returned 18.5% since Q3 (through December 14th) and outperformed the market by an even larger margin.

Is RY A Good Investment Right Now?Is RY A Good Stock To Buy?NYSE:RYSentiment Score Between 20 and 30Yahoo Finance