The market has been volatile as the Federal Reserve continues its rate hikes to normalize the interest rates. Small cap stocks have been hit hard as a result, as the Russell 2000 ETF (IWM) has underperformed the larger S&P 500 ETF (SPY) by about 4 percentage points through November 16th. SEC filings and hedge fund investor letters indicate that the smart money seems to be paring back their overall long exposure since summer months, and the funds’ movements is one of the reasons why the major indexes have retraced. In this article, we analyze what the smart money thinks of Royal Gold, Inc. (NASDAQ:RGLD) and find out how it is affected by hedge funds’ moves.

Is Royal Gold, Inc. (NASDAQ:RGLD) an outstanding investment now? Prominent investors are getting less optimistic. The number of bullish hedge fund positions were cut by 2 lately.

While collecting data for this article, we tracked down the opinion of ClearBridge Value Trust, a fund that is long on the stock. In its 3rd Quarter Shareholder Letter, the fund said this:

“Royal Gold (RGLD), in the materials sector, is a worldwide precious metal streaming and royalty company. The combination of recent strength in the U.S. dollar and higher interest rates and Treasury yields lowered precious metal prices and held back margins for Royal Gold. The company remains extremely cash-flow generative and has raised its dividend now 17 years in a row.”

Heading into the fourth quarter of 2018, a total of 17 of the hedge funds tracked by Insider Monkey were long this stock, a change of -11% from one quarter earlier. By comparison, 23 hedge funds held shares or bullish call options in RGLD heading into this year. Considering the bearishness for the stock, it’s not surprising that Royal Gold wasn’t one of the 30 most popular stocks among hedge funds. 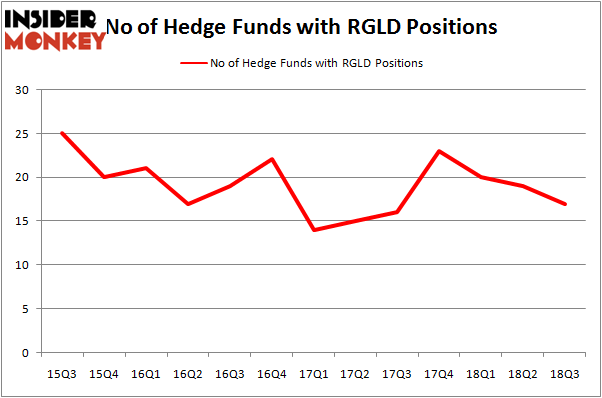 Among these funds, Horizon Asset Management held the most valuable stake in Royal Gold, Inc. (NASDAQ:RGLD), which was worth $21.5 million at the end of the third quarter. On the second spot was Millennium Management which amassed $16.5 million worth of shares. Moreover, Citadel Investment Group, PEAK6 Capital Management, and Citadel Investment Group were also bullish on Royal Gold, Inc. (NASDAQ:RGLD), allocating a large percentage of their portfolios to this stock.

Seeing as Royal Gold, Inc. (NASDAQ:RGLD) has experienced declining sentiment from the smart money, it’s safe to say that there were a few hedge funds that elected to cut their entire stakes by the end of the third quarter. At the top of the heap, Daniel S. Och’s OZ Management said goodbye to the largest position of the 700 funds monitored by Insider Monkey, worth close to $7.4 million in stock, and Noam Gottesman’s GLG Partners was right behind this move, as the fund dropped about $1.4 million worth. These moves are important to note, as aggregate hedge fund interest fell by 2 funds by the end of the third quarter.

As you can see these stocks had an average of 17 hedge funds with bullish positions and the average amount invested in these stocks was $335 million. That figure was $79 million in RGLD’s case. MDU Resources Group Inc (NYSE:MDU) is the most popular stock in this table. On the other hand Empire State Realty Trust Inc (NYSE:ESRT) is the least popular one with only 13 bullish hedge fund positions. Royal Gold, Inc. (NASDAQ:RGLD) is not the least popular stock in this group but hedge fund interest is still below average. This is a slightly negative signal and we’d rather spend our time researching stocks that hedge funds are piling on. In this regard MDU might be a better candidate to consider a long position.

Molson Coors Brewing Company (NYSE:TAP): Are Hedge Funds Right About This Stock...
Monthly Newsletter Strategy
Download a free copy of our newsletter and see the details inside!
Hedge Fund Resource Center
Related News
How Royal Gold, Inc (USA) (RGLD) Stacks Up Against Its Peers? Kopernik Global’s Bets On Gold Keep Paying Off Kopernik Global Investors Hits the Jackpot with Gold Bets in Q1 What’s the Deal With These 5 Surging Stocks? Five Gold Mining Stocks to Own Now Is Royal Gold, Inc USA) (RGLD) A Good Stock To Buy? Insiders Getting Rid Of Their Shares Of These Three Companies 5 Most Socially Responsible Companies in America 5 Ways You Can Eliminate Credit Card Debt 10 Easiest Road Test Sites in NY and NJ
Billionaire Hedge Funds