A whopping number of 13F filings filed with U.S. Securities and Exchange Commission has been processed by Insider Monkey so that individual investors can look at the overall hedge fund sentiment towards the stocks included in their watchlists. These freshly-submitted public filings disclose money managers’ equity positions as of the end of the three-month period that ended September 30, so let’s proceed with the discussion of the hedge fund sentiment on Royal Bank of Scotland Group plc (NYSE:RBS).

Is Royal Bank of Scotland Group plc (NYSE:RBS) a sound investment now? Investors who are in the know are reducing their bets on the stock. The number of long hedge fund positions retreated by 3 in recent months. Our calculations also showed that RBS isn’t among the 30 most popular stocks among hedge funds.

At the moment there are numerous indicators stock traders employ to grade publicly traded companies. Some of the less utilized indicators are hedge fund and insider trading moves. We have shown that, historically, those who follow the top picks of the top money managers can outperform their index-focused peers by a significant margin (see the details here).

What does the smart money think about Royal Bank of Scotland Group plc (NYSE:RBS)?

At the end of the third quarter, a total of 6 of the hedge funds tracked by Insider Monkey were bullish on this stock, a change of -33% from the previous quarter. The graph below displays the number of hedge funds with bullish position in RBS over the last 13 quarters. With the smart money’s positions undergoing their usual ebb and flow, there exists a few notable hedge fund managers who were upping their stakes meaningfully (or already accumulated large positions). 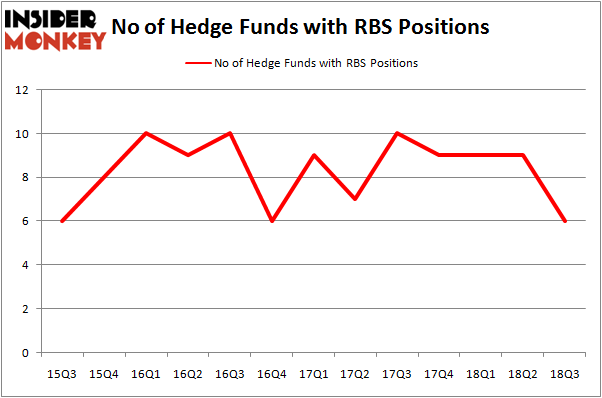 More specifically, Renaissance Technologies was the largest shareholder of Royal Bank of Scotland Group plc (NYSE:RBS), with a stake worth $29 million reported as of the end of September. Trailing Renaissance Technologies was Weiss Asset Management, which amassed a stake valued at $1.3 million. Marshall Wace LLP, Two Sigma Advisors, and Citadel Investment Group were also very fond of the stock, giving the stock large weights in their portfolios.

Due to the fact that Royal Bank of Scotland Group plc (NYSE:RBS) has experienced a decline in interest from the aggregate hedge fund industry, we can see that there is a sect of funds that elected to cut their entire stakes in the third quarter. At the top of the heap, Peter Rathjens, Bruce Clarke and John Campbell’s Arrowstreet Capital dropped the largest investment of all the hedgies watched by Insider Monkey, worth an estimated $0.5 million in stock, and Ken Fisher’s Fisher Asset Management was right behind this move, as the fund cut about $0.2 million worth. These transactions are interesting, as aggregate hedge fund interest dropped by 3 funds in the third quarter.

As you can see these stocks had an average of 27 hedge funds with bullish positions and the average amount invested in these stocks was $1.41 billion. That figure was $32 million in RBS’s case. Kinder Morgan Inc (NYSE:KMI) is the most popular stock in this table. On the other hand Barclays PLC (NYSE:BCS) is the least popular one with only 11 bullish hedge fund positions. Compared to these stocks Royal Bank of Scotland Group plc (NYSE:RBS) is even less popular than BCS. Considering that hedge funds aren’t fond of this stock in relation to other companies analyzed in this article, it may be a good idea to analyze it in detail and understand why the smart money isn’t behind this stock. This isn’t necessarily bad news. Although it is possible that hedge funds may think the stock is overpriced and view the stock as a short candidate, they may not be very familiar with the bullish thesis. In either case more research is warranted.

Hedge Funds Aren’t Crazy About Hecla Mining Company (HL) Anymore
Monthly Newsletter Strategy
Download a free copy of our newsletter and see the details inside!
Hedge Fund Resource Center
Related News
Is Royal Bank of Scotland Group PLC (RBS) A Good Stock To Buy? Why Descartes Systems Group Inc. (USA) (DSGX), AmeriGas Partners LP (APU), and Three Other Stocks Are in Spotlight Today Why RBS, Cheniere Energy, Regeneron Pharmaceuticals & Two Other Stocks Are in Spotlight Today Why Investors Are Buzzing about BlackBerry, IBM, Deutsche Bank, and Others Deutsche Bank Fine Hits Credit Suisse and RBS Hard, Plus 3 Other Stocks That Are Getting Beaten Down Today Why American Airlines, Royal Bank of Scotland, and More Are Trending Today How Are US Hedge Funds Positioned in UK Financial Stocks 11 Best Inexpensive Bourbons Under $25 That Don’t Taste Cheap 10 Best Vacation Spots for Singles in Their 40’s 15 Highest Paid YouTubers of 2018
Billionaire Hedge Funds