Redwood Trust, Inc. (NYSE:RWT) shareholders have witnessed an increase in support from the world’s most elite money managers in recent months. RWT was in 12 hedge funds’ portfolios at the end of September. There were 9 hedge funds in our database with RWT holdings at the end of the previous quarter. Our calculations also showed that rwt isn’t among the 30 most popular stocks among hedge funds. 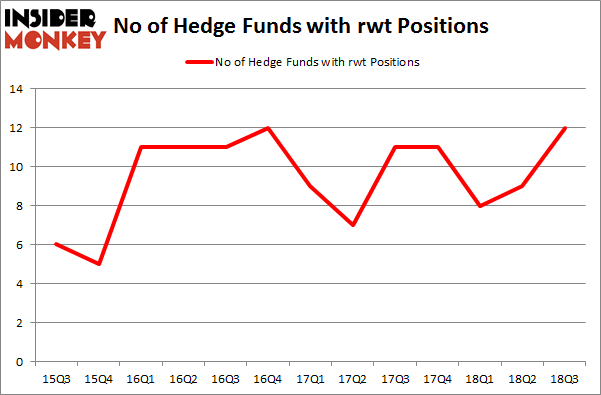 According to Insider Monkey’s hedge fund database, Wallace R. Weitz & Co., managed by Wallace Weitz, holds the biggest position in Redwood Trust, Inc. (NYSE:RWT). Wallace R. Weitz & Co. has a $57.5 million position in the stock, comprising 2.3% of its 13F portfolio. The second largest stake is held by PEAK6 Capital Management, managed by Matthew Hulsizer, which holds a $9.6 million call position; the fund has less than 0.1%% of its 13F portfolio invested in the stock. Some other members of the smart money with similar optimism include Ken Griffin’s Citadel Investment Group, Jim Simons’s Renaissance Technologies and Gavin Saitowitz and Cisco J. del Valle’s Springbok Capital.

As aggregate interest increased, key hedge funds have been driving this bullishness. Balyasny Asset Management, managed by Dmitry Balyasny, created the biggest position in Redwood Trust, Inc. (NYSE:RWT). Balyasny Asset Management had $1.6 million invested in the company at the end of the quarter. Alec Litowitz and Ross Laser’s Magnetar Capital also made a $0.2 million investment in the stock during the quarter. The only other fund with a brand new RWT position is Roger Ibbotson’s Zebra Capital Management.

As you can see these stocks had an average of 9.25 hedge funds with bullish positions and the average amount invested in these stocks was $102 million. That figure was $76 million in RWT’s case. Uniqure NV (NASDAQ:QURE) is the most popular stock in this table. On the other hand Bluegreen Vacations Corporation (NYSE:BXG) is the least popular one with only 2 bullish hedge fund positions. Redwood Trust, Inc. (NYSE:RWT) is not the most popular stock in this group but hedge fund interest is still above average. This is a slightly positive signal but we’d rather spend our time researching stocks that hedge funds are piling on. In this regard QURE might be a better candidate to consider a long position.