Out of thousands of stocks that are currently traded on the market, it is difficult to determine those that can really generate strong returns. Hedge funds and institutional investors spend millions of dollars on analysts with MBAs and PhDs, who are industry experts and well connected to other industry and media insiders on top of that. Individual investors can piggyback the hedge funds employing these talents and can benefit from their vast resources and knowledge in that way. We analyze quarterly 13F filings of over 700 hedge funds and, by looking at the smart money sentiment that surrounds a stock, we can determine whether it has potential to beat the market over the long-term. Therefore, let’s take a closer look at what smart money thinks about Raymond James Financial, Inc. (NYSE:RJF).

Raymond James Financial, Inc. (NYSE:RJF) has experienced an increase in enthusiasm from smart money in recent months. RJF was in 31 hedge funds’ portfolios at the end of the third quarter of 2018. There were 30 hedge funds in our database with RJF holdings at the end of the previous quarter. Check out the the list of 30 most popular stocks among ALL hedge funds.

To most shareholders, hedge funds are seen as unimportant, old financial tools of years past. While there are over 8000 funds with their doors open at present, Our experts hone in on the crème de la crème of this group, around 700 funds. Most estimates calculate that this group of people handle the majority of all hedge funds’ total asset base, and by tailing their matchless equity investments, Insider Monkey has uncovered numerous investment strategies that have historically surpassed the S&P 500 index. Insider Monkey’s flagship hedge fund strategy outperformed the S&P 500 index by 6 percentage points a year since its inception in May 2014 through early November 2018. We were able to generate large returns even by identifying short candidates. Our portfolio of short stocks lost 26.1% since February 2017 even though the market was up nearly 19% during the same period. We just shared a list of 11 short targets in our latest quarterly update.

At the end of the third quarter, a total of 31 of the hedge funds tracked by Insider Monkey held long positions in this stock, a change of 3% from the previous quarter. Below, you can check out the change in hedge fund sentiment towards RJF over the last 13 quarters. With hedgies’ positions undergoing their usual ebb and flow, there exists an “upper tier” of noteworthy hedge fund managers who were upping their holdings meaningfully (or already accumulated large positions). 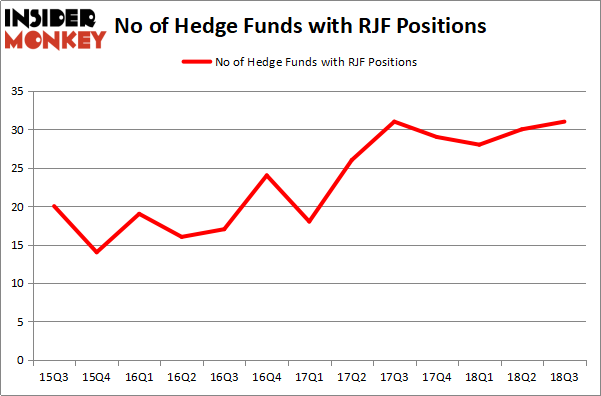 The largest stake in Raymond James Financial, Inc. (NYSE:RJF) was held by Viking Global, which reported holding $384.1 million worth of stock at the end of September. It was followed by Brave Warrior Capital with a $191 million position. Other investors bullish on the company included Fisher Asset Management, Palestra Capital Management, and Highfields Capital Management.

As one would reasonably expect, key hedge funds have been driving this bullishness. Brave Warrior Capital, managed by Glenn Greenberg, initiated the most outsized position in Raymond James Financial, Inc. (NYSE:RJF). Brave Warrior Capital had $191 million invested in the company at the end of the quarter. Malcolm Fairbairn’s Ascend Capital also made a $21.9 million investment in the stock during the quarter. The following funds were also among the new RJF investors: Jeffrey Talpins’s Element Capital Management, Steve Cohen’s Point72 Asset Management, and Roger Ibbotson’s Zebra Capital Management.

As you can see these stocks had an average of 24.75 hedge funds with bullish positions and the average amount invested in these stocks was $616 million. That figure was $1292 million in RJF’s case. Altice USA, Inc. (NYSE:ATUS) is the most popular stock in this table. On the other hand Hasbro, Inc. (NASDAQ:HAS) is the least popular one with only 20 bullish hedge fund positions.