Is Rapid7 Inc (RPD) Going to Burn These Hedge Funds?

How do you pick the next stock to invest in? One way would be to spend hours of research browsing through thousands of publicly traded companies. However, an easier way is to look at the stocks that smart money investors are collectively bullish on. Hedge funds and other institutional investors usually invest large amounts of capital and have to conduct due diligence while choosing their next pick. They don’t always get it right, but, on average, their stock picks historically generated strong returns after adjusting for known risk factors. With this in mind, let’s take a look at the recent hedge fund activity surrounding Rapid7 Inc (NASDAQ:RPD).

Rapid7 Inc (NASDAQ:RPD) was in 17 hedge funds’ portfolios at the end of September. RPD has experienced an increase in hedge fund sentiment recently. There were 14 hedge funds in our database with RPD positions at the end of the previous quarter. Our calculations also showed that RPD isn’t among the 30 most popular stocks among hedge funds.

What have hedge funds been doing with Rapid7 Inc (NASDAQ:RPD)?

Heading into the fourth quarter of 2018, a total of 17 of the hedge funds tracked by Insider Monkey held long positions in this stock, a change of 21% from one quarter earlier. Below, you can check out the change in hedge fund sentiment towards RPD over the last 13 quarters. So, let’s find out which hedge funds were among the top holders of the stock and which hedge funds were making big moves. 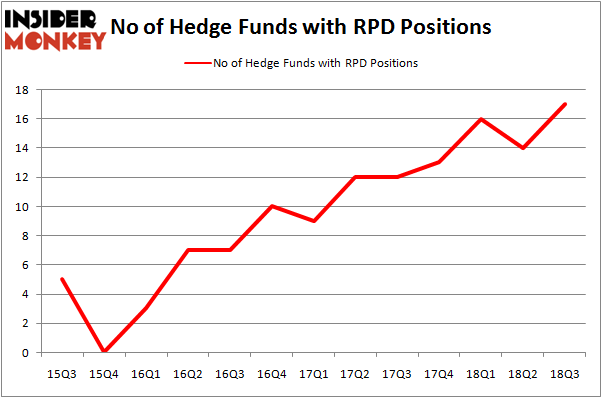 According to Insider Monkey’s hedge fund database, Renaissance Technologies, managed by Jim Simons, holds the most valuable position in Rapid7 Inc (NASDAQ:RPD). Renaissance Technologies has a $40.1 million position in the stock, comprising less than 0.1%% of its 13F portfolio. The second largest stake is held by Point72 Asset Management, led by Steve Cohen, holding a $38.8 million position; the fund has 0.2% of its 13F portfolio invested in the stock. Other hedge funds and institutional investors that are bullish comprise Bruce Garelick’s Garelick Capital Partners, Principal Global Investors’s Columbus Circle Investors and Ken Griffin’s Citadel Investment Group.

As you can see these stocks had an average of 20.25 hedge funds with bullish positions and the average amount invested in these stocks was $198 million. That figure was $222 million in RPD’s case. Sangamo Therapeutics, Inc. (NASDAQ:SGMO) is the most popular stock in this table. On the other hand IAMGOLD Corporation (NYSE:IAG) is the least popular one with only 12 bullish hedge fund positions. Rapid7 Inc (NASDAQ:RPD) is not the least popular stock in this group but hedge fund interest is still below average. This is a slightly negative signal and we’d rather spend our time researching stocks that hedge funds are piling on. In this regard SGMO might be a better candidate to consider a long position.