Is PVH Corp (PVH) A Good Stock To Buy?

As we already know from media reports and hedge fund investor letters, many hedge funds lost money in fourth quarter, blaming macroeconomic conditions and unpredictable events that hit several sectors, with technology among them. Nevertheless, most investors decided to stick to their bullish theses and recouped their losses by the end of the first quarter. We get to see hedge funds’ thoughts towards the market and individual stocks by aggregating their quarterly portfolio movements and reading their investor letters. In this article, we will particularly take a look at what hedge funds think about PVH Corp (NYSE:PVH).

PVH Corp (NYSE:PVH) has seen a decrease in activity from the world’s largest hedge funds of late. PVH was in 31 hedge funds’ portfolios at the end of March. There were 35 hedge funds in our database with PVH positions at the end of the previous quarter. Our calculations also showed that PVH isn’t among the 30 most popular stocks among hedge funds.

If you’d ask most market participants, hedge funds are seen as slow, outdated investment tools of the past. While there are over 8000 funds trading at the moment, Our researchers choose to focus on the masters of this club, about 750 funds. It is estimated that this group of investors have their hands on bulk of all hedge funds’ total capital, and by observing their finest stock picks, Insider Monkey has uncovered many investment strategies that have historically outstripped the market. Insider Monkey’s flagship hedge fund strategy outperformed the S&P 500 index by around 5 percentage points per year since its inception in May 2014 through the end of May. We were able to generate large returns even by identifying short candidates. Our portfolio of short stocks lost 30.9% since February 2017 (through May 30th) even though the market was up nearly 24% during the same period. We just shared a list of 5 short targets in our latest quarterly update and they are already down an average of 11.9% in less than a couple of weeks whereas our long picks outperformed the market by 2 percentage points in this volatile 2 week period.

Heading into the second quarter of 2019, a total of 31 of the hedge funds tracked by Insider Monkey were long this stock, a change of -11% from the fourth quarter of 2018. The graph below displays the number of hedge funds with bullish position in PVH over the last 15 quarters. With hedge funds’ capital changing hands, there exists an “upper tier” of key hedge fund managers who were increasing their stakes meaningfully (or already accumulated large positions). 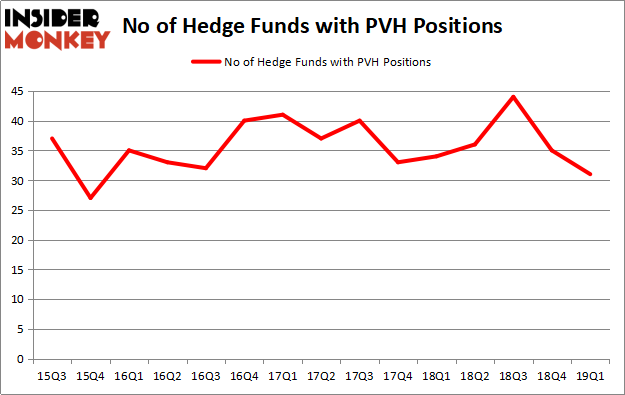 The largest stake in PVH Corp (NYSE:PVH) was held by Pzena Investment Management, which reported holding $237.3 million worth of stock at the end of March. It was followed by Renaissance Technologies with a $158 million position. Other investors bullish on the company included Adage Capital Management, Citadel Investment Group, and D E Shaw.

Since PVH Corp (NYSE:PVH) has faced a decline in interest from the smart money, we can see that there is a sect of hedge funds that slashed their positions entirely last quarter. It’s worth mentioning that Anand Parekh’s Alyeska Investment Group dumped the largest position of all the hedgies tracked by Insider Monkey, comprising an estimated $17.6 million in stock, and Robert Pohly’s Samlyn Capital was right behind this move, as the fund dumped about $15.7 million worth. These transactions are interesting, as aggregate hedge fund interest was cut by 4 funds last quarter.

As you can see these stocks had an average of 28.75 hedge funds with bullish positions and the average amount invested in these stocks was $867 million. That figure was $1298 million in PVH’s case. Zendesk Inc (NYSE:ZEN) is the most popular stock in this table. On the other hand MGM Growth Properties LLC (NYSE:MGP) is the least popular one with only 17 bullish hedge fund positions. PVH Corp (NYSE:PVH) is not the most popular stock in this group but hedge fund interest is still above average. This is a slightly positive signal but we’d rather spend our time researching stocks that hedge funds are piling on. Our calculations showed that top 20 most popular stocks among hedge funds returned 1.9% in Q2 through May 30th and outperformed the S&P 500 ETF (SPY) by more than 3 percentage points. Unfortunately PVH wasn’t nearly as popular as these 20 stocks and hedge funds that were betting on PVH were disappointed as the stock returned -30.7% during the same period and underperformed the market. If you are interested in investing in large cap stocks with huge upside potential, you should check out the top 20 most popular stocks among hedge funds as 13 of these stocks already outperformed the market so far in Q2.