Is PulteGroup, Inc. (PHM) Going to Burn These Hedge Funds?

Does PulteGroup, Inc. (NYSE:PHM) represent a good buying opportunity at the moment? Let’s briefly check the hedge fund interest towards the company. Hedge fund firms constantly search out bright intellectuals and highly-experienced employees and throw away millions of dollars on research activities, so it is no wonder why they tend to generate millions in profits each year. It is also true that some hedge fund players fail unconceivably on some occasions, but their stock picks have been generating superior risk-adjusted returns on average over the years.

Is PulteGroup, Inc. (NYSE:PHM) a buy, sell, or hold? Prominent investors are in a pessimistic mood. The number of bullish hedge fund positions shrunk by 3 lately. Our calculations also showed that PHM isn’t among the 30 most popular stocks among hedge funds. PHM was in 18 hedge funds’ portfolios at the end of the third quarter of 2018. There were 21 hedge funds in our database with PHM holdings at the end of the previous quarter.

How have hedgies been trading PulteGroup, Inc. (NYSE:PHM)?

At Q3’s end, a total of 18 of the hedge funds tracked by Insider Monkey held long positions in this stock, a change of -14% from the previous quarter. By comparison, 25 hedge funds held shares or bullish call options in PHM heading into this year. With the smart money’s capital changing hands, there exists an “upper tier” of notable hedge fund managers who were boosting their stakes substantially (or already accumulated large positions). 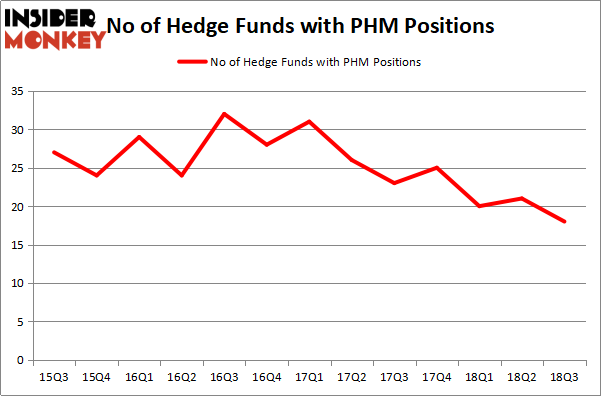 Of the funds tracked by Insider Monkey, Greenhaven Associates, managed by Edgar Wachenheim, holds the biggest position in PulteGroup, Inc. (NYSE:PHM). Greenhaven Associates has a $173 million position in the stock, comprising 2.7% of its 13F portfolio. The second largest stake is held by Cliff Asness of AQR Capital Management, with a $155.3 million position; the fund has 0.2% of its 13F portfolio invested in the stock. Some other peers with similar optimism comprise Israel Englander’s Millennium Management, Ray Dalio’s Bridgewater Associates and Ken Griffin’s Citadel Investment Group.

Judging by the fact that PulteGroup, Inc. (NYSE:PHM) has witnessed declining sentiment from the entirety of the hedge funds we track, it’s easy to see that there exists a select few funds that elected to cut their full holdings heading into Q3. At the top of the heap, Jeffrey Talpins’s Element Capital Management dumped the biggest investment of the 700 funds tracked by Insider Monkey, comprising an estimated $1.8 million in stock, and Matthew Hulsizer’s PEAK6 Capital Management was right behind this move, as the fund sold off about $1.7 million worth. These bearish behaviors are important to note, as aggregate hedge fund interest was cut by 3 funds heading into Q3.

As you can see these stocks had an average of 19.25 hedge funds with bullish positions and the average amount invested in these stocks was $711 million. That figure was $488 million in PHM’s case. Axalta Coating Systems Ltd (NYSE:AXTA) is the most popular stock in this table. On the other hand Enel Chile S.A. (NYSE:ENIC) is the least popular one with only 4 bullish hedge fund positions. PulteGroup, Inc. (NYSE:PHM) is not the least popular stock in this group but hedge fund interest is still below average. This is a slightly negative signal and we’d rather spend our time researching stocks that hedge funds are piling on. In this regard AXTA might be a better candidate to consider a long position.